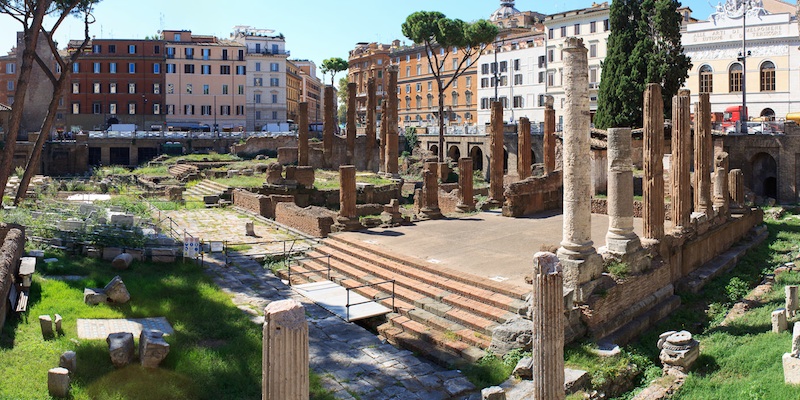 Holy Area of ​​Largo Argentina
The Area Sacra (Sacred Area) complex in Largo Argentina is delimited by Via Florida, Via di San Nicola de’ Cesarini, Via di Torre Argentina, and Largo Argentina. Four temples of the republican period discovered during the works performed in the surroundings between 1926 and 1928 are situated in the area. These ancient buildings of uncertain identification are conventionally indicated with the first letters of the alphabet A-B-C-D. A portico is placed in front of the temples, still partly visible under the modern staircase that accesses the area, identified as Porticus Minucia Frumentaria, in other words the place where wheat was distributed free of charge to the Roman people. The entire area stands on travertine paving and dates back to the time of Emperor Domitian (81-6 A.D.).The most ancient of the four temples is temple C, the third one on the northern side (the side of Largo Argentina). It dates back to the third century B.C. and is most certainly the temple of Feronia, Italic divinity originally worshipped in Sabina, built by Curius Dentatus after his victory over the Sabines in the year 290 B.C..Temple A, the first one on the northern side, follows in chronological order being dated back to the third century B.C.. The building suffered several transformations in the course of centuries, until it was incorporated into the Churh of San Nicola de’ Calcarario in the Middle Ages. It is probably the temple of Juno Curitis or Diuturna. The ruins of the large portico called Hecastylon (having one hundred columns), on which the sacred area bordered, are still visible on the northern side of the temple. The ruins of a public latrine are situated behind the temple. It belonged to the complex of the nearby portico of Pompey (today no longer visible) that also included the quadrangular exedra situated between the temples C and B, identified as the Curia of the Theatre of Pompey where Julius Caesar was killed in 44 B.C..Temple D was built later at the beginning of the third century. Identified as the temple of Lari Per marini or of the Nymphs, today it is partly covered by Via Florida.The last temple, temple B, was built in the second century B.C., and was probably dedicated to the "Fortuna del giorno presente" (Fortuna huiusce diei, Fortune of the current day). A statue with parts in marble, bronze, and valuable materials of a goddess, probably the statue of the cult worshipped in the temple, was found next to it. Behind the temples A and B there are a few chambers that can be dated back to the first half of the first century A.D., considered to be the Administration Offices of the Waters of Rome (Statio acquarum).The area suffered deep transformations at the beginning of the sixth century A.D., the traces of which were unfortunately almost completely cancelled by the excavations performed in the Thirties. Probably a monastery founded by the philosopher Severinus Boethius rose in the Middle Ages on the structures of the temples, the refectory of which is perhaps represented by the large rectangular hall situated in front of temple A.Between the eighth and the ninth centuries the area was occupied by buildings, probably residences of noble families, and by a church, built inside temple A, of which the frescoes in the apse and a twelfth-century altar are still conserved. The church was called San Nicola de’ Calcarario, due to the presence in the surroundings of several ovens for the production of lime (calce), and in 1611 was consecrated to San Nicola dei Cesarini. It was demolished in the Twenties. The only Middle Age monument that survived is the Torre del Papito, situated in front of temple D.

Are you a local? What do you think about Holy Area of ​​Largo Argentina? Login to suggest it!