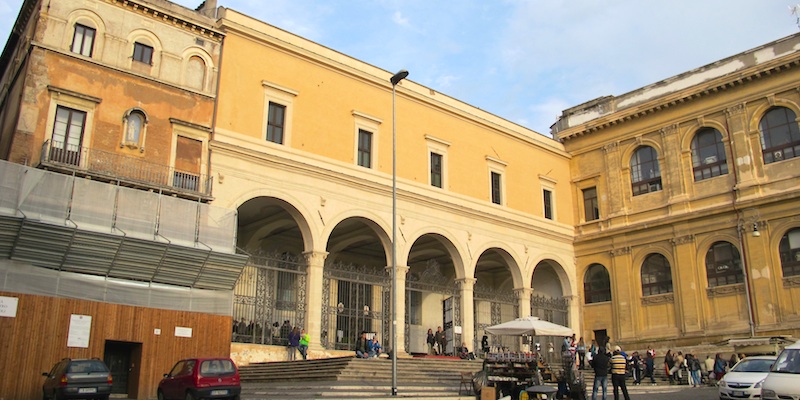 St. Peter's Basilica in Vincoli
The church of San Pietro in Vincoli is also known as Basilica Eudossiana, because it was rebuilt (replacing another one of identical dimension, the latter built on Roman ruins), by Eudossia, wife to the Emperor Valentiniano III, to treasure the chains of San Pietro retained in Gerusalemme and entrusted to her by her mother Eudocia.

Consecrated by Pope Sisto III in 439, it was restored under the papacy of Adriano I in 780 circa, and then after the year 1000.

Remarkable works were carried out by Sisto IV’s nephew, Cardinal Giuliano Della Rovere, between 1471 and 1503, year in which he was elected Pope under the name Giulio II.

In recent excavations, performed on the occasion of the restoration of the pavement, ruins from the previous buildings were dug out and are now accessible.

The façade is preceded and hidden by an elegant porch that rises from a wide stairway.

The interior is quite grandiose for the parade of splendid columns that divide it into three naves and confer a theatrical aspect, due to the ceiling with a very low vault, portraying "Il Miracolo delle Catene" by Parodi.

According to tradition, the two chains (ties) used to tie up San Pietro are still treasured underneath the altar. It also hold the famous “Mosè” by Michelangelo.

Are you a local? What do you think about St. Peter's Basilica in Vincoli? Login to suggest it!