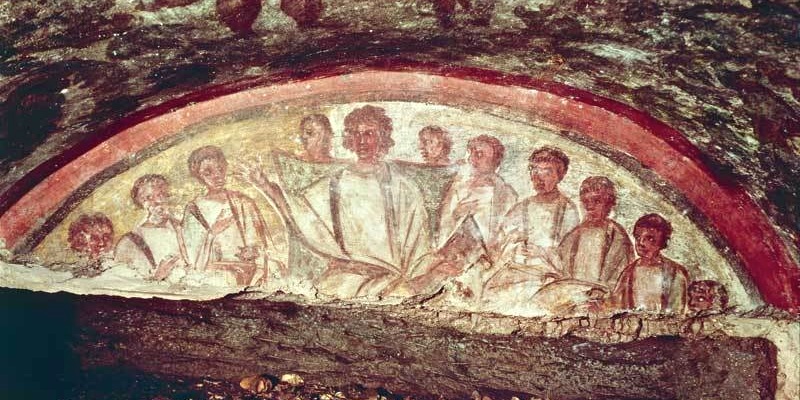 Catacombs of Domitilla
1 local person suggests it This extensive network of galleries began in the private cemetery of Domitilla, whose uncle, the emperor Domitian (81-96), belonged to the rich Flavian family. In 95 Domitilla’s husband, Flavius Clemens was denounced as a Christian and executed on Domitian’s orders. Domitilla was exiled to the Isle of Pandataria (now called Ventotene).
Domitilla’s catacombs became famous in the fourth century when a basilica was built over the graves of St Nereus and St Achilleus. According to legend they were two of Domitilla’s servants who like their mistress converted to Christianity. In fact they were two soldiers maryred under Diocletian (284-305). Not far from their tomb lay St Petronilla whose sarcophagus was transferred to the Vatican in the eight century. The church built over the grave of Sts. Nereus and Achilleus is a three-naved basilica.

Amongst the numerous objects found in the ruins were two pillars which had supported the giborium ornamented with sculptures representing the death of the two saints by decapitation; one of these pillars is perfectly preserved, and the name of Achilleus is carved on it. Behind the apse is a fresco representing Santa Petronilla and Santa Veneranda. On the right of the basilica is one of the oldest parts of the cemetery (2nd century), where members of the Flavian family were buried.

Linked to it is a cubiculum with a fresco of Christ the Good Shepherd. Another area, known as "della Madonna" (of the Virgin), has different paintings dating back to the third and fourth century, among those is the Magi approaching the Virgin with child.


Are you a local? What do you think about Catacombs of Domitilla? Login to suggest it!

ADDRESS: Via delle Sette Chiese 280/282, Rome
OPENING HOURS : Daily from 9.00 am - 12.00 pm and 2.00 pm - 5.00 pm Last admission 15 minutes before closing time. Closed: Tuesday, December 25, January 1, Easter and from mid December to mid January.
PRICE: 8 euro. Reduced: 5 euro for school groups, presenting a letter of introduction from their School; children from 6 to 15 years of age; soldiers and security forces in uniform or with identification card. Free entrance for children up to the age of 5; professors, teachers and catechists accompanying students groups – one per 15 students allowed; the disabled, with a carer; guides and drivers of groups paying full-price tickets.
WEBSITE: http://www.domitilla.info
YOU MAY ALSO BE INTERESTED IN...
It was Ardeatine

700 m
Basilica of San Sebastiano outside the Walls