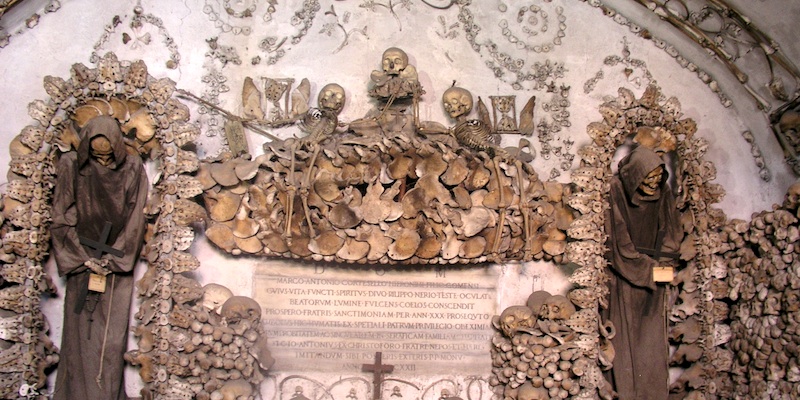 Church of Santa Maria Conception of the Capuchins
The Church was built thanks to the concern of Cardinal Antonio Barberini, Capuchin. His brother, Pope Urbano VIII Barberini, blessed its first stone on October 4th 1626, St. Francis’ Day and celebrated the first Mass on September 8th 1630. The Church’s design is by the pontifical architect Michele da Bergamo ( + 1641), Capuchin, who also directed the work and left a detailed memory about that.

It is the first Roman Church dedicated “to God in honour of the Blessed Virgin Mary”. It is led by the Minor Capuchins, the group of Franciscan friars living in the adjacent convent rebuilt from 1928 to 1933, after that an old one dating back to 1631 had been demolished to open Via Veneto and to build up the Ministry for Corporations, as it was then called. You can get inside through a staircase having the shape of scissors, above which there is the façade in bricks, with white-stone pilaster strips; it is divided into two overlapped orders. In the lower one there is the door surmounted by a triangular tympanum, and two small windows; in the upper one a big window with a curvilinear architrave surmounted by a tympanum with an oval little window.

As all the capuchins’ churches, it is an aisleless church with higher lateral chapels closed by wooden gates. Just the CENTRAL ALTAR was built with marble, in compliance with the will of Urbano VIII Barberini, whose escutcheon can be seen at the basis of the two columns. A painted wall separates the presbytery from the choir standing at the back and having three orders of seats with desks dating back to 1739.

Are you a local? What do you think about Church of Santa Maria Conception of the Capuchins? Login to suggest it!


Church of Santa Maria Conception of the Capuchins
ZonzoFox
4.4