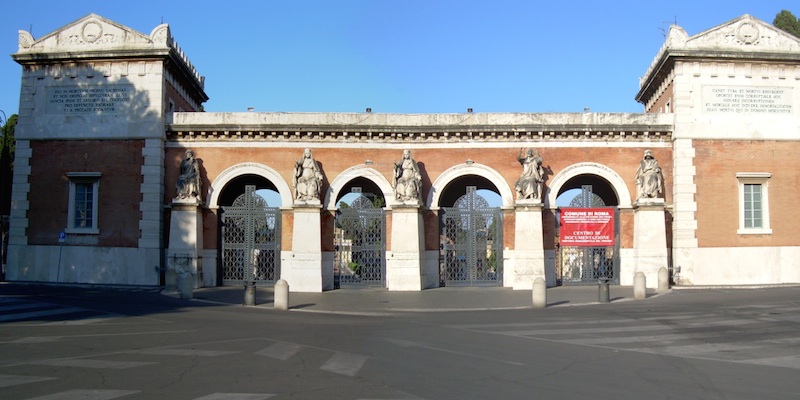 Monumental Cemetery of Verano
At the time of the French occupation of Rome (1808-1814) the Napoleonic edict (of St-Cloud, 1804) was also applied to the city and obliged the burial of the deceased outside the urban areas in order to avoid the spreading of epidemics. The area chosen for the cemetery was adjacent to the Basilica of San Lorenzo fuori le Mura, which was also built on the previous Roman burial ground of Ciriaca. After some initial operations by Valadier, Pope Pius IX entrusted the works to Virginio Vespignani, also buried here, who built the Quadriportico, the church of Santa Maria della Misericordia and the higher burial zone: the Pincetto.

The monumental three-arched entranceway embellished with four huge seated statues (representing Silence, Charity, Hope and Meditation) was completed later. The architect Gioacchino Ersoch designed the burial zones for the Jews and non-Catholics, the autopsy building and the avenue of the Chapels. Today’s arrangement follows the Allied bombing of the San Lorenzo suburb on 19 July 1943, which also damaged part of the cemetery and the nearby basilica.

Among the many graves, characterised by sculptures inspired by classical themes, realism and symbolism, are the ones of Ernesto Nathan, mayor of the city from 1907 to 1913; the Romanesque poets Pascarella, Trilussa and Belli; the architects Piacentini, father and son, and Gaetano Koch; and the painters Balla, Roesler-Franz and Maccari. The actors Ettore Petrolini, Checco and Anita Durante, Aldo Fabrizi and Alberto Sordi, as well as film director Roberto Rossellini, are also buried here.

Documentation Center
Located in the entrance room of the Quadriportico, it preserves films on the old technique of funerary painting realized with enamel on lava stone; photographic documents on tombstones and chapels, and video documents on the history of the Verano and its bombing in 1943.


Are you a local? What do you think about Monumental Cemetery of Verano? Login to suggest it!

ADDRESS: Piazzale del Verano, Rome
OPENING HOURS : From 1 October to 31 March open every day 7:30am-5pm. From 1 April to 30 September open every day 7:30am-6pm.
WEBSITE: http://www.cimitericapitolini.it/cimiter...
YOU MAY ALSO BE INTERESTED IN...
Basilica of St. Lawrence outside the Walls