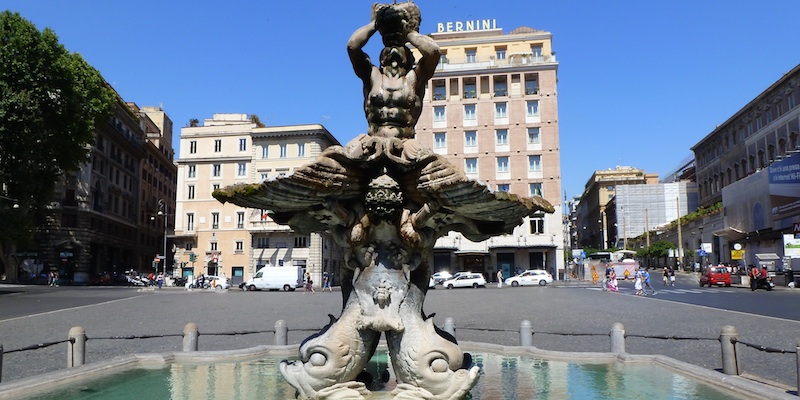 Triton Fountain
The fountain was commissioned by Urban the Eighth Barberini (1623-1644) and built by Gian Lorenzo Bernini between the end of 1642 and the first half of 1643. It is sculpted in travertine blocks. Four dauphins emerging from the centre of the pond with their mouths open and their tails intertwined support a huge two-valve shell. Two papal coats of arms of Urban the Eighth are placed on the tails of the dauphins.

The figure of a triton stands above the shell, clenching its two valves in his powerful hands,with his head bent backwards in the act of blowing in a buccina (Roman horn) held upwards with both arms that pours water. The work is a celebration of the Barberini family connected with the palace lying behind it. It enhanced the square that still had a “suburban” appearance on the edge of the main road Strada Felice (today Via Sistina and Via delle Quattro Fontane), as shown in prints of the time.

Life around the fountain was very lively, to the extent that many foreign artists chose to have their residence in the surroundings of Piazza Barberini at the beginning of the past century.

Are you a local? What do you think about Triton Fountain? Login to suggest it!

100 m
Church of Santa Maria Conception of the Capuchins