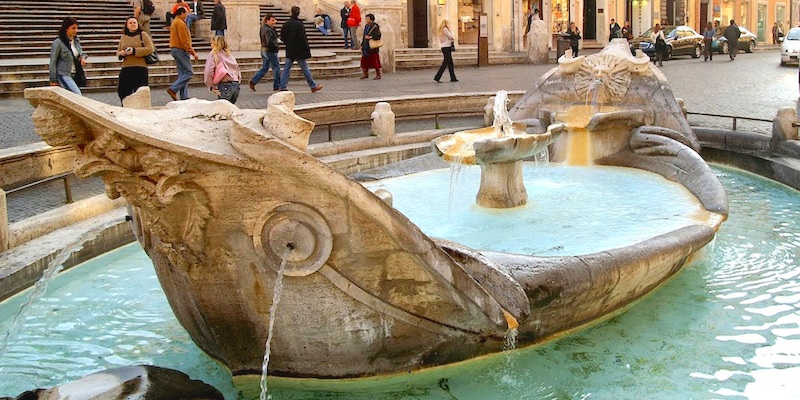 Barcaccia Fountain
1 local person suggests it The fountain is fed by the Acqua Vergine and was built between 1626 and 1629 by Pietro Bernini, appointed architect of Acqua Vergine by pope Urban the Eighth Barberini (1623-1644). Some scholars attribute it to his son Gian Lorenzo, but it is more probable that he only completed the works after his father’s death.

The fountain has the form of a boat with identical prow and stern floating in an oval pool. The edges of the sides are very low and give the impression that the boat is about to sink. Two huge coats of arm of Urban the Eighth with three bees decorate the outer part of the prow and stern. The water pours out from the sides of the coats of arms from fake guns.

Inside instead there are two suns with human faces, another emblem of the Barberini family, with water that pours out of their mouths and is collected by volutes that canalise it outside. The symbols on the fountain with the bees and the suns refer to Urban the Eighth, the founder of the monument.

The term “barcaccia” refers to the boats used on the Tiber in the nearby port of Ripetta. Other reasons that inspired the fountain can probably be the fact that once in that zone there was a naumachia– open building where sea games and battles with miniature warships were fought– and also that floods of the Tiber river dragged boats to the foot of Trinità de’ Monti.

Are you a local? What do you think about Barcaccia Fountain? Login to suggest it!

600 m
Arch of the Argentari

1.8km
The Inn at the Spanish Steps