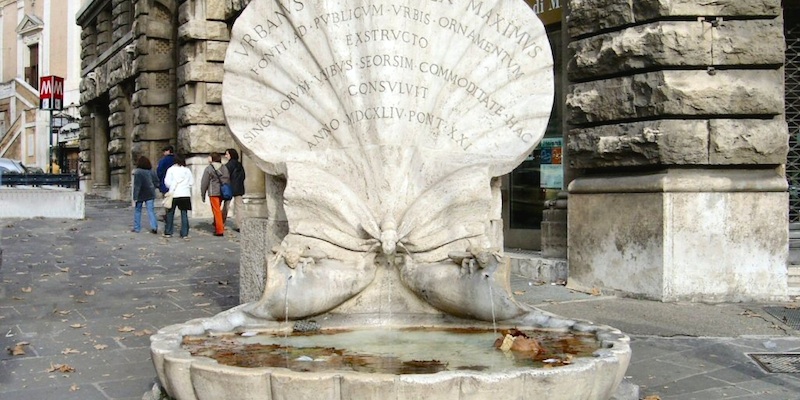 Bee Fountain
The fountain of the Api (Bees) was built in1644 by Gian Lorenzo Bernini. It was originally situated at the corner between Via Felice (today Via Sistina) and Piazza Barberini, and leaned against the small palace owned by Nicolò Soderini. It was used to water the horses, using the water drained from the nearby fountain of the Triton, of which it became a sort of appendage.

The fountain was demolished for traffic requirements in 1865 and its fragments were deposited in the depots of the Municipality, where they remained for several decades. In 1915 it was rebuilt by Adolfo Apolloni, sculptor and Spokesman for the Fine Arts of the Municipality of Rome, at the corner of Via Veneto, no longer leaning against the building, but isolated and supported by travertine blocks.

The original fountain by Bernini consisted of a large shell with the valves open. One was horizontal and acted as a basin, while the other leaned against the corner of palazzo Soderini and bore an inscription dedicated to Urban the Eighth Barberini (1623-1644). Three bees, symbol of the Barberini family, placed on the upper part of the hinge poured water.

The modern reconstruction has greatly altered the appearance of the monument. It consists of a lower part with a round and channelled basin that is modern, like the upper valve. The only fragment of the fountain by Bernini that survives is one of the bees. Furthermore, travertine resulting from the demolition of Porta Salaria was used for the work, instead of the original marble from Luni.

The inscription was put together by D’Onofrio. It says: “Il Sommo Pontefice Urbano VIII, costruita una fontana a pubblico ornamento dell’Urbe, a parte fece fare questo fontanile per uso dei cittadini nell’anno 1644, ventunesimo del suo pontificato” (The Supreme Pontiff Urban the Eighth, after building a fountain for the public decoration of the Eternal City, built this separate fountain for the use of the citizens in the year 1644, the twentieth of his papacy).

Are you a local? What do you think about Bee Fountain? Login to suggest it!