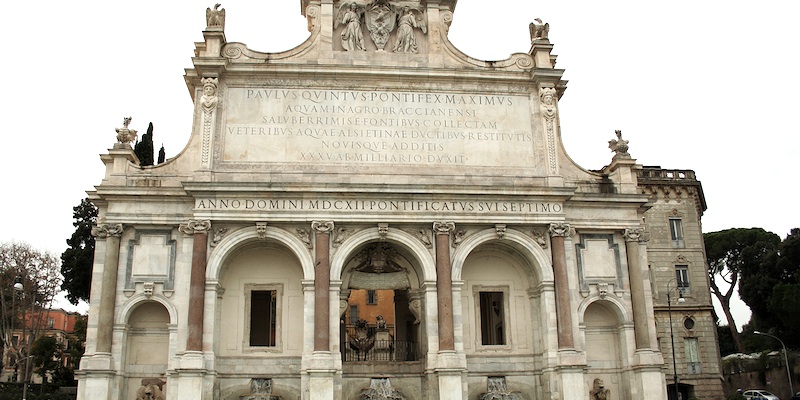 The work is the result of the collaboration between Giovanni Fontana and Flaminio Ponzio, who inspired themselves very successfully to the fountain of the Acqua Felice built twenty years earlier by Sixtus the Fifth Peretti (1585-1590). The materials for the new construction were largely taken from the Forum Romanum and from the ancient basilica of Saint Peter.

In 1690 under pope Alexander the Eighth Ottoboni(1689-1691), Carlo Fontana (1634-1714) referred to the design made by Bernini for the Trevi fountain that was never carried out and transformed the original five ponds into the single large pond visible today and opened the central arch.

From 1901 to the nineteen-thirties the water from the “fontanone” fed Rome’s first hydroelectric power plant.

A curiosity: there is a mistake in the large beautiful epigraph in the attic, because it specifies that the alsietine aqueduct had been restored, while it actually was the ancient aqua traiana.

Are you a local? What do you think about Fontana d'Acqua Paola (Fontanone del Gianicolo)? Login to suggest it!

ADDRESS: Via Garibaldi, Rome
OPENING HOURS : The front of the Fontanone is always visible. By appointment, you can also access the small rear garden (maximum 25 people per group). Info and reservations at (+39) 060608 (daily 9:00 to 21:00).

1.5km
Arch of the Argentari