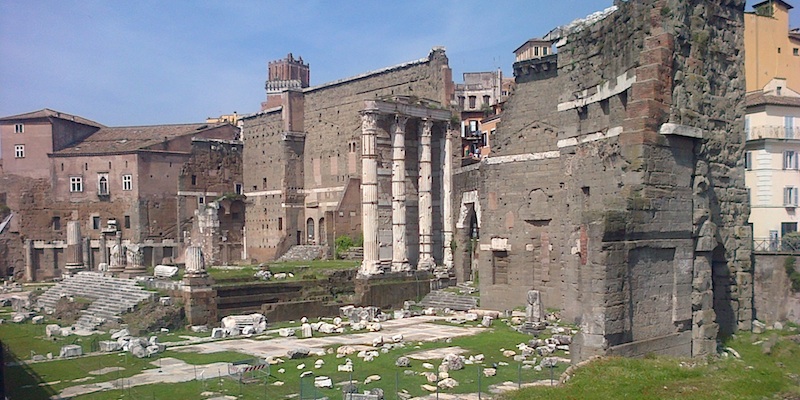 Augusto's Forum
Chronologically the second forum built in the city and inaugurated in the year 2 AD, the Forum of Augustus was surrounded by a grandiose wall 33 meters high made of peperino blocks and gabina stone, which separated it from the populous Suburra quarter of the city. There were two entrances in the wall: a three-arched entrance, on the north side, and a single-arched entrance, also known as the Arch of thePantani. The forum was composed of a rectangular square flanked by porticoes,with the Temple of Mars Ultor (Mars the Avenger) on the rear end, preceded by a large stairway. During the Middle Ages the temple’s podium was occupied bySaint Basil’s Church, now disappeared.

TEMPLE OF MARS ULTOR – The decision to build the temple had been taken before the battle of Philippi (42 BC), but it was finally inaugurated in 2 AD. It was a grand building of white Carrara marble, with 8 columns on the front and 7 along the long sides. Only three of these columns are still standing and are surmounted by an architrave: the last three on the south-east side, together with the end pier. The cella ended with an apse which housed the cult statues of Mars, Venus and perhaps of the DivineJulius as well. The temple was also used for Senate meetings and religious ceremonies. Today there remains the high tufa stone block podium and the imposing central stairway.

SEMICIRCULAR PORTICOES – The square of the forum was surrounded by large porticoes and two semicircular exedra containing rectangular niches on two levels. The niches housed statues of victors and members of the Julian family. The attic was decorated with caryatids and trophies. The porticoes were used by the urban praetors who dealt with civil lawsuits. In the later Empire they were also used for education and school activities.

Are you a local? What do you think about Augusto's Forum? Login to suggest it!