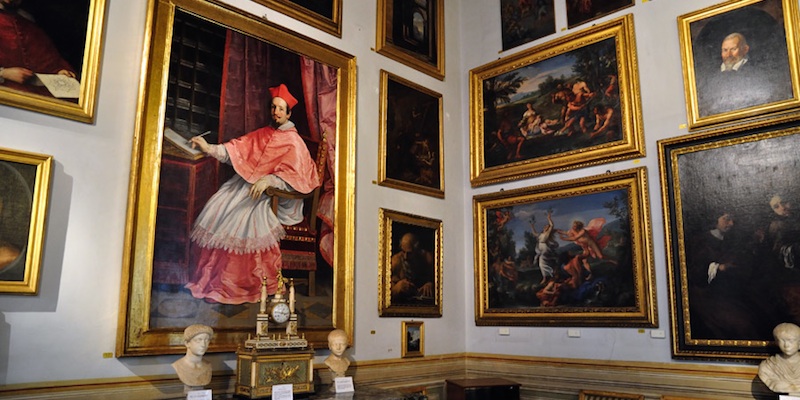 Spada Gallery
The Spada Gallery is located in the Palace with the same name that formerly belonged to the cardinal Girolamo Capodiferro (1502-1559), who assigned its construction in 1548 to the architect Bartolomeo Baronino. The rich decorations on the facade and the stuccoes in the courtyard were realized by Giulio Mazzoni.

In 1632 the Palace was purchased by cardinal Bernardino Spada (1594-1661), who made it his residence calling painters, sculptors, and architects to restore it. Francesco Borromini himself realized in 1652-53 the particular Perspective Gallery in cooperation with themathematician Father Giovanni Maria from Bitonto that through the optical illusion created by the ascending floor, the converging walls and the descending vault simulates a much longer depth than the actual 9 meters.

Cardinal Bernardino, being a passionate collector, set up his collection of paintings, which was increased later through the contribution of his nephews, in four halls in the left wing of the Palace. The Palace and the Gallery were purchased by the State in 1936 after alternate events that caused the dispersion of a large number of paintings, to house the Council of State.

Currently the collection of the Gallery, largely consisting of cardinal Bernardino’s collection, presents a rich set of paintings, pieces of furniture, antique and modern sculptures, including two seventeenth century maps of the world and of the heavens by the Dutchman W. Blaeu.

The variety of the selected iconographic subjects, that go from religious to mythological scenes, from portraits to still lives, as well as the differences between the pictorial schools represented, constitute an important example of the taste of collectors in the seventeenth and eighteenth centuries.


Are you a local? What do you think about Spada Gallery? Login to suggest it!

ADDRESS: Piazza Capo di Ferro 13, Rome
OPENING HOURS : Monday-Sunday: 8.30 am - 7.30 pm. Closed: every Tuesday, December 25, January 1. The ticket office closes 30 minutes before closing time.
PRICE: 5 euro. Concessions: 2,50 euro for UE members between 18 and 25 years old and teachers. Free admission on the first Sunday of the month and always for under 18, tour guides, reserved school groups from European Union schools, accompanied by one teacher every 10 students, teachers and students of faculties of Architecture, Conservation of the Cultural Heritage, Education Sciences, and degree courses in the Arts.
WEBSITE: http://galleriaspada.beniculturali.it
YOU MAY ALSO BE INTERESTED IN...
Palazzo Spada