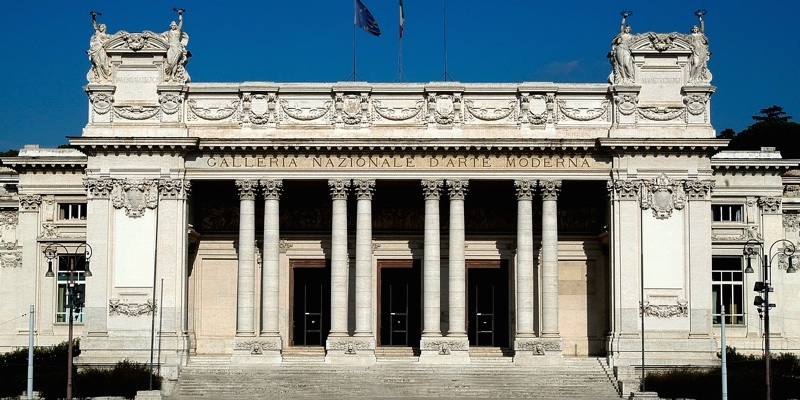 GNAM - National Gallery of Modern and Contemporary Art
The National Gallery of Modern and Contemporary Art is today a museum with two hearts.
The first is the Museum's connection to the past. Its cultural history is intertwined with that of the Italian State which achieved complete political unity only in 1870 with the establishment of Rome as its capital. The first half of the 19th Century was a period of great political and cultural ferment and this is the foundation upon which the Museum stands.
On the other hand the Museum, since its founding in 1883, has always looked to the present. It's mission being to represent "living" art.

The Museum's first three decades were spent at the Exposition Palace constructed by Pio Piacentini in 1883. The Museum's current seat goes back to 1915. Monumental, but spacious as well, the building was created by Cesare Bazzani for the exposition celebrating the fiftieth anniversary of Italian unification in 1911. The site's suburban area, beyond the city walls and Porta del Popolo, began its development at that time, taking the name Valle Giulia.

The collection was presented following a criteria organized around regional schools but allowing for the exposition of important foreign artists as well. The works were acquired at the great National Expositions and at the international Biennale of Venice. Such works represent the best of what was at that time officially admitted: a great deal of Symbolist, Neo-renaissance Decandentism, Italian verismo and a few nods towards the Secessionist movement as well.

Additionally there were a number of important donations and bequests by protagonists of the then recently ended 19th century. Works prevalently of the Southern schools by Morelli, Palizzi and Celentano.
In the years ensuing the end of the First World War to the end of the Second World War the panorama of the Contemporary collections accented a national and a regional nature. Acquisitions regarding the 19th century also focused on the ‘national' artists critically favored at that time. These were oriented towards romantic intimacy: Macchiaoli, Divisionists and the sculptor Medardo Rosso. In 1933 and 1934 the architect Bazzani returned and expanded the building but until 1945 these new spaces were devoted exclusively to works celebrating the tenth anniversary of Fascism.

Soon the Gallery would acquire the autnomous status of Superintendent and from the mid 1940's until 1975 was under the supervision of Director Palma Bucarelli (1910-1998). These were fertile years where the Gallery was closely allied to the methodologies of the Roman University school. First with Lionello Venturi, and later with Giulio Carlo Argan the Gallery acquired international prestige thanks to a museography of wide breadth encompassing timely and relevant expositions by the likes of Picasso, Mondrian and Pollock, to mention only a few. There were new acquistions of works by international masters of the Twentieth century,such as Mondrian, Modigliani, Moore and Pollock, for example, as well as essential Italian artists like Burri, Colla, Capogrossi, Fontana, Manzoni and the Kineticists. In the 1960's the collection was re-ordered, underscoring its abundance and even its apparent completeness.

Paradoxically the departure of Bucarelli along with the birth of the new Ministry of Culture deprived the Gallery of its independence regarding acquisitions. Reduced to the level of its fellow Superintendents, the following twenty years were characterized by a notable decline in promoting the contemporary in art. However this was compensated by a noteworthy policy of acquistions geared towards filling in the missing blanks regarding pre-unification Italy, the first half of the 19th century. Such were the works aquired: historical, romanticist and purist by artists such as Palagi, Koch, Gastaldi, Ciseri and Franchi. Important donations followed one another in quick succession with series of works by Italian masters of the 20th century - above all Balla, De Chirico, Guttuso. There were new museums acquired as well: house-museums of collectors of the 19th and 20th centuries such as the Praz and Boncompagni museums and artists studios of the 20th century such as those of Manzù and Andersen.

Palma Bucarelli undertook a new expansion of the Gallery behind Bazzani's double structure. Planned by Luigi Cosenza but not yet completed, the area is destined for temporary activities and services.

A first sign of renewed attention to the contemporary came in 1995 under Minister Paolucci with the acquisition of a group of works from the 1980's by exponents of the Transavanguardia movement. Regarding the generation of the 1990's Superintendant Pinto promoted the initiative "Partito preso" (Taking sides) a program with roots going back to Bucarelli's time which focused on the encouragement of young artists.

In 1997 Minister Veltroni assumed a strong and decisive position reguarding the individuation of spaces for a new seat, the new MAXXI museum (presently under construction). It will be dedicated to the collections and in general to the totality of current artistic activity. The museum's location is near the via Flaminia between Porta del Popolo and Ponte Milvio on via Guido Reni which connects Renzo Piano's music auditorium to the river Tiber.

On the other side of the river stands the Foro Italico, destined to be the cultural center of the 21st century where Valle Giulia, the site of the Gallery and other important museums and academies has been that of the 20th.

Thus the National Gallery of Modern Art in Valle Giulia has acquired the status of "mother museum", that of the 19th and 20th centuries. The new seat will host "root" works from Valle Giulia, those that are the most innovative in regards to language and research over the last thirty years of the 20th century (among others Pascali, Kounellis, Paolini, Pistoletto, Zorio, Mochetti, Cucchi, Paladino, Clemente).

The MAXXI will then continue on its own to document today's art in Rome and in the world; art expressed in any medium, whether institutional - sponsored through prizes, acquisitions and direct commissions, or in free forms - experimental and outside of any institution.


Are you a local? What do you think about GNAM - National Gallery of Modern and Contemporary Art? Login to suggest it!