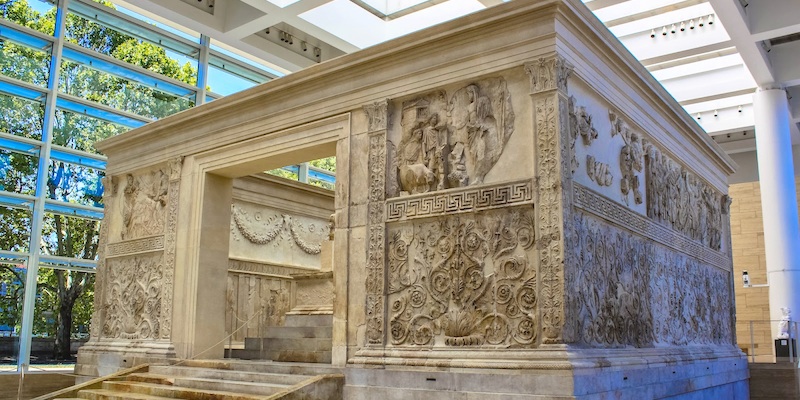 Ara Pacis Museum
The Ara Pacis is the first work of architecture built in the historical centre of Rome since the end of Fascism. The museum space was designed by the architectural studio of American architect Richard Meier, the author of some of the most notable museums of the second half of the 20th century. The Ara Pacis represents one of the highest examples of classic art.

The Senate decided to build an altar to Peace dedicated to Augustus, upon its return from Gaul and from Spain where, in the course of three years, he had consolidated the power of Rome and his own power, he had opened new ways and founded colonies.

The altar was built along the via Flaminia, at the border with the northernmost part of the Field of Mars, but the alluvial soil of the area and the floods of the Tiber caused the burial of the Ara, of which no memory was left. The rebuilding of the monument was decided in 1937/38 in the bimillenary of Augustus birth.

It was given to archaeologist Giuseppe Moretti and was realized in the summer of 1938 inside the pavillion of via di Ripetta, hurriedly built from a project by Ballio Morpurgo.

Due to the location on the banks of the Tiber, the Ara Pacis risked to be destroyed by the inappropriateness of its container that could not protect it from traffic, exhaust fumes, overheating, humidity and greasy and acidic dust that deposited all over its surface. The new complex has been for this reason planned to preserve the monument in accordance with the most up to date conservation criteria.


Are you a local? What do you think about Ara Pacis Museum? Login to suggest it!

ADDRESS: Lungotevere in Augusta, Rome
OPENING HOURS : Open daily, from 9.30am to 7.30pm. 24 and 31 December: 9.30 am - 2.00 pm. Last admission 1 hour before closing time. Closed: January 1, May 1, December 25.
PRICE: 10.50 euro. Concessions: € 8,50; Roman Citizens only (by showing a valid ID): Adults: € 8,50; Concessions: € 6,50. Every first Sunday of the month free admission, except for the Ara Pacis new exhibition space, for residents in Rome and in the metropolitan city area. Free admission for children up to 6 years; disabled visitors and a carer; tourist guides.
WEBSITE: http://www.arapacis.it
YOU MAY ALSO BE INTERESTED IN...
Church of Santa Maria dei Miracoli