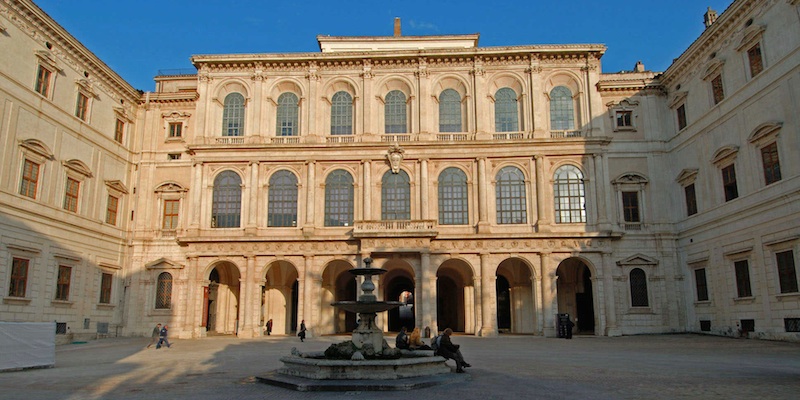 Palazzo Barberini
Palazzo Barberini was designed by Maderno and built on the site of the previous Villa Sforza, for Matteo Barberini, who became pope with the title of Urban VIII. On Maderno’s death in 1629, Gian Lorenzo Bernini took control of construction.

The main façade, which is framed by two wings, in the style of a roman country villa, is the work of Bernini. By superimposing three tiers of attached columns and shallow pilasters to frame two floors of huge windows over an open porch at ground level, he created a sense of dignity and solemnity appropriate to the Barberini family.

One of Bernini’s collaborators was Francesco Borromini. Borromini has left his mark in the two small curiously pedimented upper windows in the intermediate sections linking the wings to the central block of the building.

The windows in the rear façade were decorated by Borromini who also designed the the curving staircase on the right, corresponding to the rectangular main staircase on the opposite side, which was designed by Bernini.

The latter is also responsible for the central hall, two floors high, and the adjacent oval room with its harmonious classical proportions, which takes up a typical theme of Bernini, the elliptical plan.

The great hall was decorated by Pietro da Cortona, who worked on it from 1633 to 1639: the allegorical theme, derived from the poet Francesco Bracciolini, centres on the “Triumph of Providence” and was intended to exalt the glory of the papal family.

With the unity of Italy the area surrounding Palazzo Barberini was involved in jerry-building and in the changes of the new capital, Rome.

The square was the centre of an important crossroads: via Veneto that connected the new district built after the demolition of villa Ludovisi; the enlarged and renewed via del Tritone; the new via Barberini terminated in 1932 that completed the excavation of the old entrance to the palace, whose monumental door had already been removed with the construction of the old Hotel Bristol.

Are you a local? What do you think about Palazzo Barberini? Login to suggest it!

YOU MAY ALSO BE INTERESTED IN...
National Gallery of Ancient Art - Palazzo Barberini