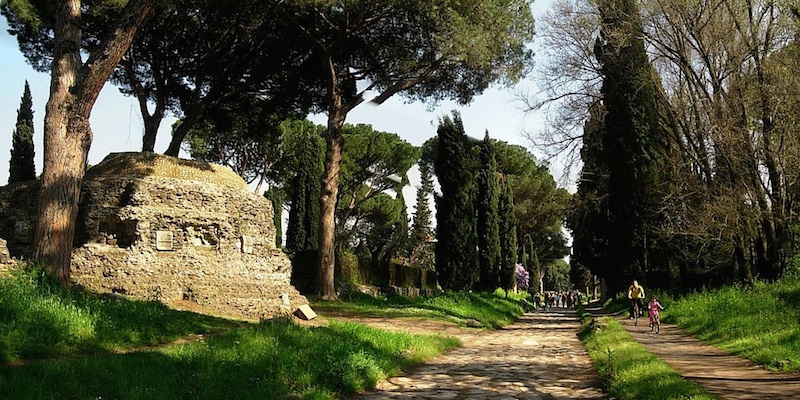 Ancient Appia Park
The Parco dell'Appia Antica offers visitors an unforgettable experience in a setting full of charm where nature and archaeological monuments melt in harmony, elements that have always characterized this part of the Agro Romano between Rome and the Castelli Romani, and a source of inspiration for many artists.

To conserve and enhance this huge historical and natural heritage the Parco dell’Appia Antica was instituted. Its main reference is the Via Appia, the most important and most famous of Rome, which earned itself the name of “Regina Viarum”. The Park covers an area of around 3,400 hectares.

Along the Appia Antica we can see many elements and monuments that bear witness to the history of Rome: the best known of these from republican and imperial times are Terme di Caracalla (although this is outside the Park) Porta San Sebastiano and the Mura Aureliane, the Tomba di Geta, the Sepolcro di Priscilla, the Circus and Massenzio's imperial palace, Cecilia Metella's huge round mausoleum, the Villa dei Quintili, the large cylindrical sepulchre, known as Casal Rotondo; there are catacombs that date back to the first centuries of Christianity such as those of S. Callisto, Domitilla (on the edge of the Park), S. Sebastiano, (the Basilica above this is very popular with visitors) and Pretestato; there are numerous mediaeval, renaissance and baroque churches along the way, Santa Maria in Palmis, well known by the name Quo vadis; mediaeval towers and fortifications, often built on the ruins of Roman monuments, like the castle built by the Tuscolo counts around the sepulchre of Cecilia Metella.

The Park territory also takes in the Valle della Caffarella, with the river Almone running through it, this is the most important scenic element reflecting ancient agricultural use close to the city, but it also has a wealth of important monuments from a variety of periods like the temple of the god Redicolo, the Ninfeo di Egeria, the church of Sant'Urbano, the mediaeval towers; the Tombe Latine and the Parco degli Acquedotti, with the imposing ruins of the conduits that supplied the city with water.

The seat of the park and the starting point of guided tours is in the Ex Cartiera Latina (via Appia Antica 42). The via Appia is closed to the traffic on Sundays and holidays and is the ideal place to walk or bike.


Are you a local? What do you think about Ancient Appia Park? Login to suggest it!

ADDRESS: Via Appia Antica 42, Rome
WEBSITE: http://www.parcoappiaantica.it
YOU MAY ALSO BE INTERESTED IN...
Domine Quo Vadis (St. Mary in Palmis)