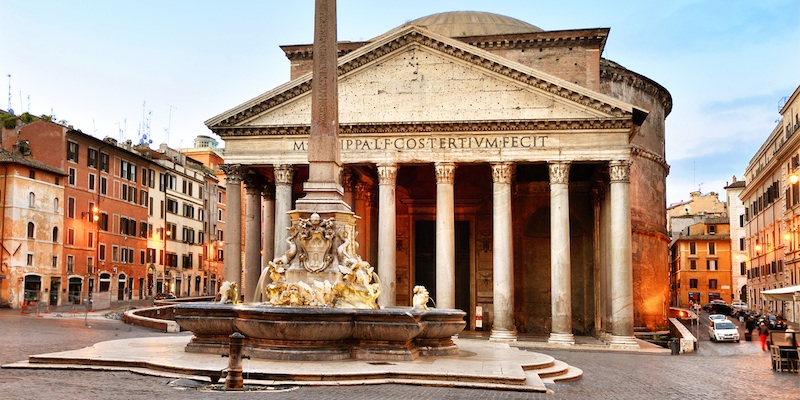 Piazza della Rotonda (Pantheon)
The square faces the Pantheon and the monument characterises it in such a way that many Romans don’t even know its name: they simply call it “the square of the Pantheon”.

In the middle of it is the obelisk found in the temple of Isis (Iseum Campense), like the Minerva obelisk. It was placed here in 1711 and decorated with dolphins and coats of arms on commission of Pope Clement XI. The hieroglyphics remind the dynasty of Ramset II.

Two curiosities: the plate upon the building facing the Pantheon says that the square has been reclaimed of inns and brothels in the 18th century by the papal authorities; another plate, on the façade of the building now seat of the hotel Del Sole, says that here lived the famous poet Torquato Tasso.

Another cinema curiosity: the famous British director Peter Greenaway choose this square (together with the Vittoriano) to shoot many sequences of his wonderful film The Belly of an Architect. Since it is a beautiful small and lively square, everybody in the city love to walk here or stop and sit down at a coffee table or on the steps of the fountain in the middle of it.

Are you a local? What do you think about Piazza della Rotonda (Pantheon)? Login to suggest it!

ADDRESS: Piazza della Rotonda, Rome
YOU MAY ALSO BE INTERESTED IN...
Pantheon