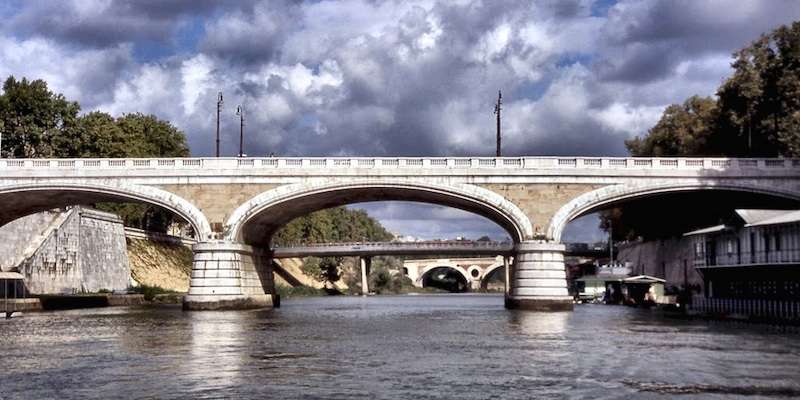 Regina Margherita Bridge
This bridge was designed by Angelo Vescovali and built between 1886 and 1891. It was dedicated to Margherita of Savoy, first queen of Italy. It was 111 m (123 yd) long and 20 m (22 yd) wide and has three stone arches. It connects the Prati Quarter with Piazza del Popolo.

The first two bathing establishments in the city were created in its immediate surroundings: "Romana Nuotatori" and "Rari Nantes". The admission card to the establishments was rather expensive for those times, so they assumed an aristocratic character from the very beginning.

The pontoon of one of the most famous figures of the recent history of the river “Er Ciriola” was also moored in the surroundings of the bridge. A well-known representative of the so-called “fiumaroli” that habitually frequented the banks of the Tiber river, Er Ciriola owes his fame also to his countless rescues of persons from the river, for which he was awarded the medal for civic valor.

Are you a local? What do you think about Regina Margherita Bridge? Login to suggest it!

ADDRESS: Lungotevere dei Mellini, Rome
YOU MAY ALSO BE INTERESTED IN...
Bridge Nenni