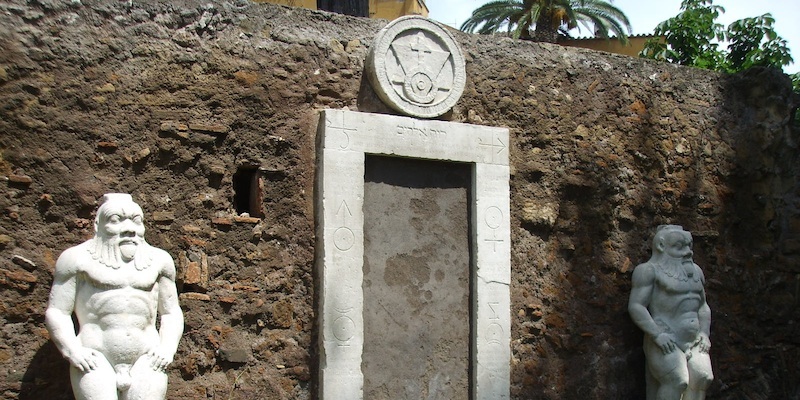 Magic Gate
The Porta Alchemica (English: Alchemical Door), also known as the Alchemy Gate or Magic Portal, is a monument built between 1678 and 1680 by the Marquis Massimiliano Palombara marquis of Pietraforte in his residence the Villa Palombara. It is located on the Esquiline hill, near Piazza Vittorio, in Rome. This is the only one of five former gates of the villa that remains; there was a lost door on the opposite side dating them to 1680 and four other lost inscriptions on the walls of the mansion inside the villa.

According to a story collected by the erudite Francesco Cancellieri in 1802, a pilgrim named "stibeum" (from Latin: stibium = antimony) was hosted in the villa for a night. That night, the pilgrim, identified later by some as the alchemist Giustiniani Bono, searched the gardens of the villa overnight in search of a mysterious herb capable of concocting gold. Legend held that the next morning he was seen to disappear forever through a door, but left behind a few flakes of gold, the fruits of a successful alchemical transmutation, and a mysterious paper full of puzzling symbols and equations, putatively describing the ingredients and process required. Perhaps the paper referred to the Voynich manuscript, a mysterious document belonging earlier to King Rudolf II of Boemia.[citation needed] The marquis had these symbols engraved on the five gates of the villa Palombara and on the walls of the mansion, hoping that one day they would be translated.

A second legend holds that between 1678 and 1680, Giuseppe Francesco Borri, known as Giustiniani Bono, along with Athanasius Kircher and Bernini designed and built the Gate for the Marquis. The Marquis Palombara developed a passion for alchemy in 1656, when he visited the alchemical laboratory in the Riario Palace, now known as the Palazzo Corsini. Patronized by the exiled queen Christina of Sweden, the laboratory was supervised by Pietro Antonio Bandiera and had been visited by Borri and Kircher. This tradition holds the gate was built to memorialize a successful alchemical transmutation the occurred in Riario laboratory.[citation needed] It was rumored that Palombara, Bernini and Kircher were all poisoned on 28 November 1680, probably by Borri, for having revealed the secret formulas through the inscriptions on the gate.

Cancellieri published his semi-fanciful account in 1806, including his interpretation of the inscriptions on the Porta Alchimica. His work was published in 1895 in French by Pietro Bornia.
It is suggested as well that the geometrical construction of the gate is similar to that of the 21st emblem of Michael Maier’s Atalanta Fugiens (Frankfurt, 1617).

The particular drawing on the pediment of the gate, with two overlapping triangles and Latin inscriptions, recapitulates the title page in the posthumous 1677 edition of the alchemical book Aureum Saeculum Redivivum by Adrian von Mynsicht (1603–1638). In 1747, the emblem was used by Wienner von Sonnenfels in his Splendor lucis, oder Glanz des Lichts. Similarly, the lower part of the emblem by von Mynsicht (known also as Madathanus) depicting a "centrum in trigono centri", was reproduced in the manuscript called the Geheime Figuren der Rosencreutzer (Altona, 1785–88). Finally the same drawing appear in a bookmark possessed by Berenger Saunière, a parish priest at Rennes-le-Château in 1885.


The monument has numerous symbols and inscriptions used in alchemy. The inscriptions are hard to read from the monument itself. Around the circle at top: “The center is in the triangle of the center.” Also: “There are three marvels: God and man, mother and virgin, triune and one.” The Hebrew inscription, Ruach Elohim, means “Spirit of God.” Beneath it: “A dragon guards the entrance of the magic garden of the Hesperides, and, without Hercules, Jason would not have tasted the delights of Colchis.” There are six sigils on the jambs, each with its phrase. Saturn/Lead: “When in your house black crows give birth to white doves, then will you be called wise.” Jupiter/Tin: “The diameter of the sphere, the tau in the circle, and the cross of the globe bring no joy to the blind.” Mars/Iron: “He who can burn with water and wash with fire makes a heaven of earth and a precious earth of heaven.” Venus/Bronze: “If you make the earth fly upside down, with its wings you may convert torrential waters to stone.” Mercury: “When azoth and fire whiten Latona, Diana comes unclothed.” Antimony: “Our dead son lives, returns from the fire a king, and enjoys occult conjugation.” On the base, Vitriol: “It is an occult work of true wisdom to open the earth, so that it may generate salvation for the people.” In another plate, now lost, was the device VILLAE IANUAM TRANANDO RECLUDENS IASON OBTINET LOCUPLES VELLUS MEDEAE 1680 (Passing by opening the door of the villa, Iason obtained the rich fleece of Medea 1680). And on the doorstep, “SI SEDES NON IS,” an ambiguous quasi-palindrome, meaning both “If you sit, do not go,” and “If you do not sit, go.”

The standing figures on both sides of the door feature deformed creatures, with short, stout legs and a grotesque bearded face represent a real Egyptian divinity or semi-divinity, called Bes. A patron of the home, childbirth and infants in ancient Egypt, Bes was also known in imperial Rome, where in pre-Christian age several people followed Egyptian cults.

Originally the two statues did not belong to Villa Palombara. They were found somewhere near the Quirinal Hill, where in ancient times stood a large temple dedicated to the Egyptian gods Isis and Serapis; century after century, many of its rich decorations, reliefs, small obelisks, etc. were unearthed, and were relocated in different parts of the city. During the works for the opening of piazza Vittorio, in 1888 also these statues were moved from their original location to the Porta Alchemica.

Are you a local? What do you think about Magic Gate? Login to suggest it!

ADDRESS: Piazza Vittorio Emanuele II, Rome
OPENING HOURS : By reservation only. Max 25 people per visit.
PRICE: 4 euro. Concessions: 3 euro. The price of the ticket does not include guided tours organized by Cultural Associations. Phone Booking required. Groups and schools: call (+39) 060608 (daily from 9.00 am to 9.00 pm).
YOU MAY ALSO BE INTERESTED IN...
Piazza Vittorio Emanuele II

50 m
Santa Prassede at the Esquiline

1.5km
Arch of the Argentari