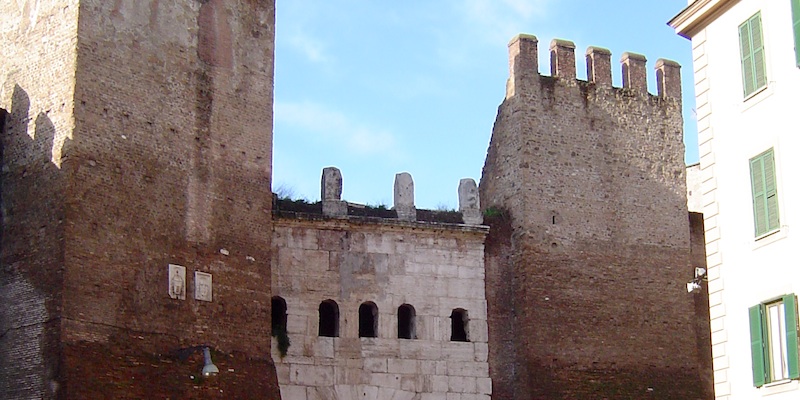 The gate originally was an arch, built under Augustus, in the point in which three aqueducts (Aqua Marcia, Aqua Julia and Aqua Tepula) passed over the Via Tiburtina. The arch was restored by Emperors Titus and Caracalla.

The arch of Augustus was incorporated in the Aurelian Walls by Emperor Aurelian. At the time of Honorius' restoration, in the 5th century, a second, external opening was built, with five small openings that enlightened the room where the gate was operated.

With time, the gate changed its name into Porta San Lorenzo, because of the presence of the close by basilica of San Lorenzo fuori le Mura. Common people, however, called it Capo de' Bove or Porta Taurina, since the arch of Augustus was decorated with bull skulls.

The gate is the witness of the victory obtained in the evening of 20 November 1347 by the Roman popular leader Cola di Rienzo against the city's barons forces, in which the latter's leader Stefano Colonna was killed.

Next to the gate, there is the church of Santa Bibiana.

On the top, on the Aqua Julia, a 5 BC inscription that reads: "IMP(erator) CAESAR DIVI IULI F(ilius) AUGUSTUS PONTIFEX MAXIMUS CO(n)S(ul) XII TRIBUNIC(ia) POTESTAT(e) XIX IMP(erator) XIIII RIVOS AQUARUM OMNIUM REFECIT". Imperator Caesar Augustus, son of the divine Julius, pontifex maximus, consul for the twelfth time, tribune of the plebs for the nineteenth time, imperator for the thirteenth time, restored the channels of all the aqueducts.

On the lower channel of Aqua Marcia there is an inscription about the restoration by Emperor Titus in 79: "IMP(erator) TITUS CAESAR DIVI F(ilius) VESPASIANUS AUG(ustus) PONTIF(ex) MAX(imus) TRIBUNICIAE POTESTAT(is) IX IMPerator) XV CENS(or) CO(n)S(ul) VII DESIG(natus) IIX P(ater) P(atriae) RIVOM AQUAE MARCIAE VETUSTATE DILAPSUM REFECIT ET AQUAM QUAE IN USU ESSE DESIERAT REDUXIT". Imperator Titus Caesar, son of the divine Vespasianus Augustus, pontifex maximus, tribune of the plebs for the ninth time, imperator for the fifteenth time, censor, consul for the seventh time, (consul) chosen for the eighth time, pater patriae, restored the channels of the Aqua Marcia destroyed by the time, and restored back the water that was no longer used.

Are you a local? What do you think about Porta Tiburtina? Login to suggest it!