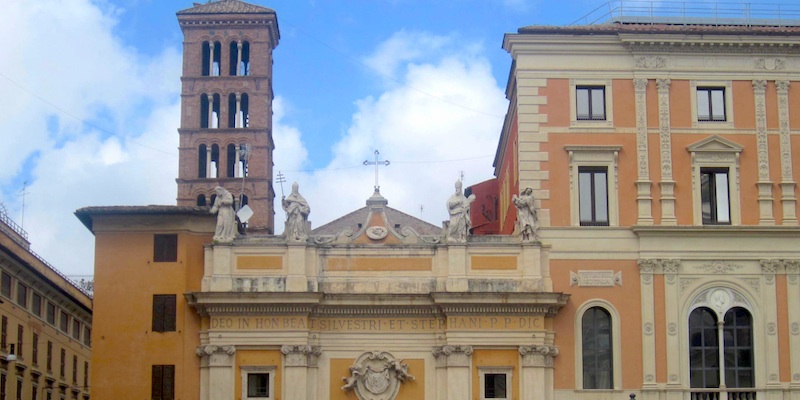 San Silvestro in Capite
The church, bearing a small monastery annexed, is located on the ruins of the Tempio del Sole. Its construction started under the papacy of Stefano II (752-757 and was then completed by his brother Paolo I who entrusted it to the Benedettini.

During century XII the church was defined "incapite" since San Giovanni Battista’s head was venerated in the adjacent church of S. Giovannino.

The church underwent numerous restyling until century XVI under Francesco da Volterra who was then succeeded by Carlo Maderno. The current baroque façade with a single order and tripartite by pilaster strips was carried out via a project by Domenico deRossi in 1703. The portal with a medieval frame leads to a courtyard rich of marble and preceeding the entrance.

Next to the church one finds the Romanesque bell tower (1210) and five orders of mullioned windows with two lights. The interior has a single nave and chapels with paintings, decorations and precious furniture. In the chapel of the Addolorata one finds a fourteenth-century-reliquary where San Giovanni’s head is treasured.

Nowadays the church belongs to the English nation and is officiated by the Padri Pallottini.

Are you a local? What do you think about San Silvestro in Capite? Login to suggest it!