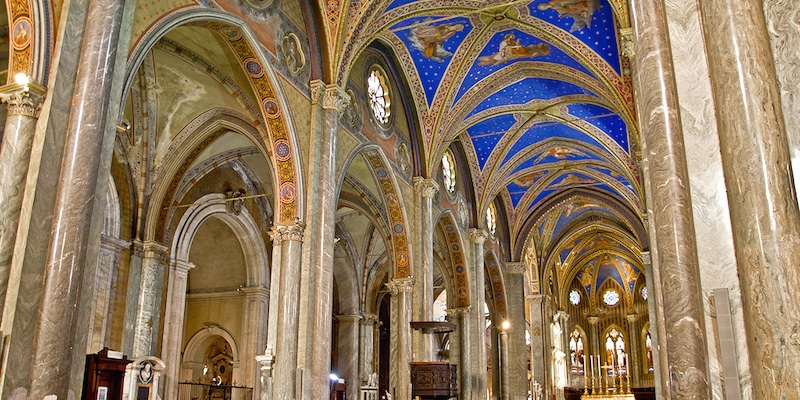 Santa Maria above Minerva
Founded on the ruins of a temple dedicated to Minerva Calcidica during C. VII, it was rebuilt with Gothic shapes during C.XII. During the Renaissance the façade was reordered and substantial internal works were performed. On the façade only three portals are left from teh epoch. Particular attention has to be paid to the Egyptian obelisk, supported by a little elephant, which is located next to the church.

Originally conceived to decorate Palazzo Barberini, it is an example of Bernini’s great strength. The antique obelisk was found in the garden of the Monastero di Santa Maria sopra Minerva and the friars wanted it to be raised in their square. The beautiful façade of the church that looks at it by the side is quite singular for the contrast: it is so simple that it does not leave any room to fantasy.

The interior represents the only example of a Gothic architectural complex in Rome. It has three naves with cross vaults laid on pilasters, whose marble coating and the pictorial decoration are a result of the restoration (1850) that has deprived the monument from its original aspect.


Are you a local? What do you think about Santa Maria above Minerva? Login to suggest it!