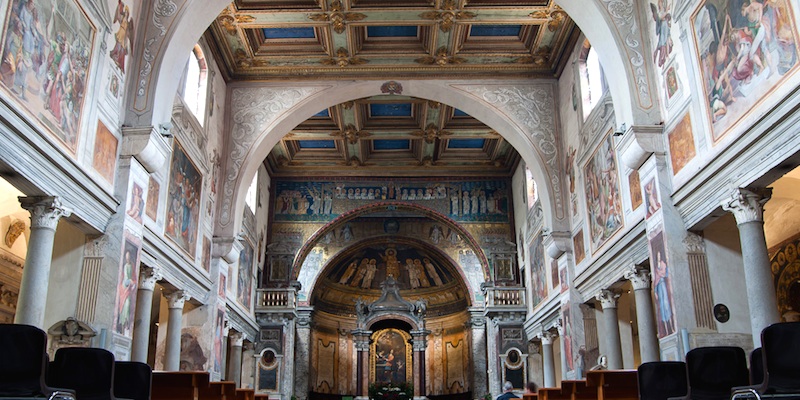 Santa Prassede at the Esquiline
Built by Paschal I in 822, it was often restored with modifications on its original aspect. The façade, which opens up to the open-air atrium, has columns of the antique narthex and three arched windows on top. The basilical inside was originally divided up into three naves with sixteen granite columns that directly supported the trabeation. Four of the latter were then incorporated into reinforcing pilasters, on which three big transversal arcades were setup.

Splendid are the walls’ frescoes with stories of the Passio, figures of Apostles on pilasters, angels and festoons, works by various authors of early C.XVII. In the middle of the floor a porphyry disk covers a well where, according to legends, Santa Prassede collected the remainings and blood of martyrs. San Zeno’s chapel is the most important Byzantine monument in Rome and collects some of the most important Byzantine mosaics.

Are you a local? What do you think about Santa Prassede at the Esquiline? Login to suggest it!

Santa Prassede at the Esquiline
ZonzoFox
4.0