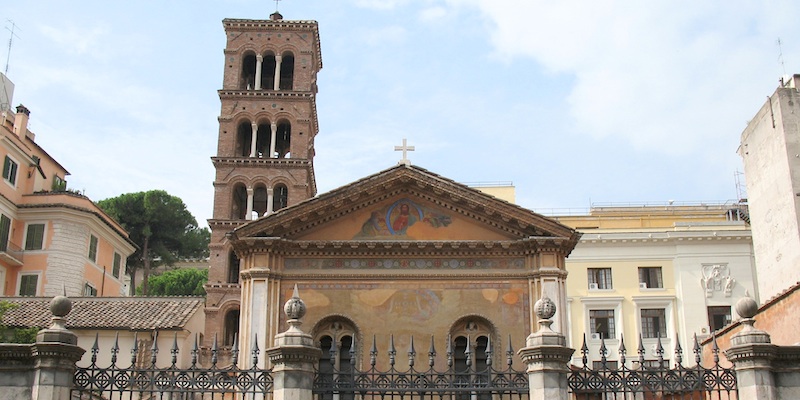 Santa Pudenziana al Viminale
One of the most antique churches in Rome, raised on the house of Senator Pudente said to have hosted San Pietro and where later on (during C.II), a thermal building was constructed. The latter was turned into a basilica, between the end of C. IV and the beginning of C.V, to then be dedicated to Santa Pudenziana (probably sister to Santa Prassede). Under the Papacy of Adriano I the church was rebuilt, then restored under Gregorio VII and by Pope Innocenzo III, who we owe the magnificent bell-tower.

In 1589 it was widely modified by the hand of Francesco da Volterra. The rebuilt façade by the order of Cardinal Luciano Bonaparte purchaser for Antonio Manno (1870), embodies a marvellous frieze by C. XI, conversion of the original frame of the door, with the medallions of Pastore and Pudente, Pudenziana and Prassede and, in the middle, the mystic Agnello. The interior of the church, divided into three naves by six antique columns, one may admire the mosaic from C. IV and carved in '500, among the most antique ones in Rome.

Are you a local? What do you think about Santa Pudenziana al Viminale? Login to suggest it!