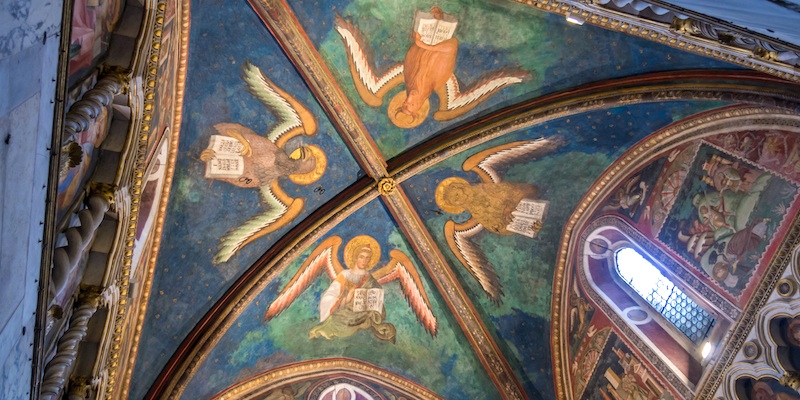 Sanctuary of the Scala Santa and Sancta Sanctorum Chapel (San Lorenzo in Palatio)
HISTORY OF THE SANCTUARY
There is no pilgrim who has come to Rome without desiring to visit the Pontifical Sanctuary of the Holy Stairs. It is one of the most important and renowned sanctuaries in the Roman Catholic Church. Situated near the Basilica of Saint John Lateran, the Sanctuary houses the Sancta Sanctorum, recognized as the first private Papal chapel. The sanctuary gets its name from the 28 marble steps of the Holy Stairs.

THE SCALA SANTA
According to an ancient Christian tradition, Saint Helena (†335), the mother of Constantine, had the stairs transported from Pontius Pilate’s palace in Jerusalem to Rome. It is believed that Jesus climbed these stairs several times the day he was sentenced to death, thus, they are known as the “Scala Pilati” or “Scala Sancta” (the Holy Stairs or Pilate’s Stairs). The first written testimonies to this renowned memory of the Passion are found in a passage from the Liber Pontificalis dating from the time of Sergius II (844-847) and in a Papal Bull issued by Pope Pascal II (1099-1119). It is also known that the stairs were originally placed in the complex of the Lateran Palaces (Patriarchium), the ancient seat of the Papacy. Under the supervision of Sixtus V in 1589, the stairs were placed in front of the Sancta Sanctorum, creating the core of the Sanctuary that can be seen today. The Sanctuary was restored by Pius IX (1846-78) and an adjoining convent was built and entrusted to the Passionist Fathers on February 24, 1853. Following the example of many saints and illustrious and devoted men and women before him, Pope Pius IX climbed the stairs many times throughout his lifetime, until the eve of the capture of Rome and his voluntary reclusion in the Vatican in 1870. The Sanctuary, as part of the Holy See, according to the 1929 Lateran pact between Mussolini and the Roman Catholic Church, has the all the rights of extraterritoriality.

THE CHAPEL OF THE SANCTA SANCTORUM
After climbing the last step, the pilgrim finds himself in front of the iron grating which protects the Sancta Sanctorum. According to medieval historians, this was “the most venerated sanctuary in Rome” and was, until the Renaissance, the private oratory of the Popes. Today it remains a testament to the splendour of the ancient Patriarchium and to a thousand years of papal history. The founder of the chapel remains unknown; however it was originally dedicated to St. Lawrence, and in the IX century it was called the Sancta Sanctorum, due to the numerous important relics housed within. The first mention of the chapel is found in the Liber Pontificalis, written in the time of Pope Stephen III (†772). More testimonies began to appear from the year 1000 onwards, particularly as regards the Holy week liturgy and the possession of the Lateran. Gregory IV (†844) had a private apartment built near the chapel to allow him to pray there and preside over the clerics of the Curia more easily. The Popes including Leo III (†816), Innocent III (†1216), Honorius III (†1227), Nicholas III (†1280) and Callistus III (†1458) competed with each other to adorn and restore the Sancta Sanctorum. The latter two were particularly important in this process, and it is to them that we owe the present form of the chapel. Under the supervision of Nicolas III, frescos attributed to the school of Cavallini, Cimabue and others were created, as was the mosaic above the altar and the Cosmati floor. Callistus III (†1458) later built the reinforcing wall at the back of the chapel. The Chapel sustained no serious damage during the sack of Rome in 1527 and the later building and work of Sixtus V preserved the main features of the Sancta Sanctorum.

THE ACHEROPITA IMAGE
The most ancient and venerated object in the Sancta Sanctorum is the image of the Holy Saviour. Kept above the altar, it is referred to as the “Acheropita” (not made by human hands). Due to its importance, the Chapel is referred called by the name of this image in several documents. Painted on a wooden panel, the image of the Saviour is represented sitting on a throne, blessing with his right hand and holding the scroll of the Gospel in his left hand. The origins of the image remain unknown. By the 8th Century, it was the subject of such veneration that, according to the Liber Pontificalis, Stephen II carried it on his shoulders during a procession to ward off the danger posed by the invasion of the Langobards (735); equally significant were the processions to celebrate the 15th of August, held every year according to an ancient Roman custom. The Acheropìta was retouched and restored under John X (†928), Alexander III (†1181), and Innocent III (†1216); Jesus’ face as it appears now is a reproduction on silk, applied to the original during its second restoration. Innocent III had the painting clad with gilded silver plate leaving only the head visible. Whatever its origin may be, the history of the icon is tied to over 1000 years of devotion. It is one of the most important relics of the faith which has remained till today.

THE TREASURE AND THE RELICS
Below the Papal altar, protected by an enormous wrought iron cage, lie two bronze doors, covered with reliefs and inscriptions dating from the 13th century. These decorations cover the cypress wood ark, specifically made by Leo III to contain the illustrious treasures and relics of the Sancta Sanctorum. In 1902, the grate was opened for the first time since 1521, after Father F. Jubaru S.J. got the permission to examine the head of Saint Agnes which was kept within. In 1905, F. H.Grisar, was allowed to open it once again to study the magnificent collection of sacred objects made of gold, silver, ivory, and precious woods, together with numerous relic holders, crosses, fabrics, brocades, parchments, miniatures and enamels, all of incalculable value – a veritable treasure chest. The reliquaries were transferred to the Sacred Christian Museum in the Vatican library. Among the relics kept at this site were the heads of the apostles Peter and Paul, which are now venerated in the Basilica of Saint John Lateran.

Are you a local? What do you think about Sanctuary of the Scala Santa and Sancta Sanctorum Chapel (San Lorenzo in Palatio)? Login to suggest it!