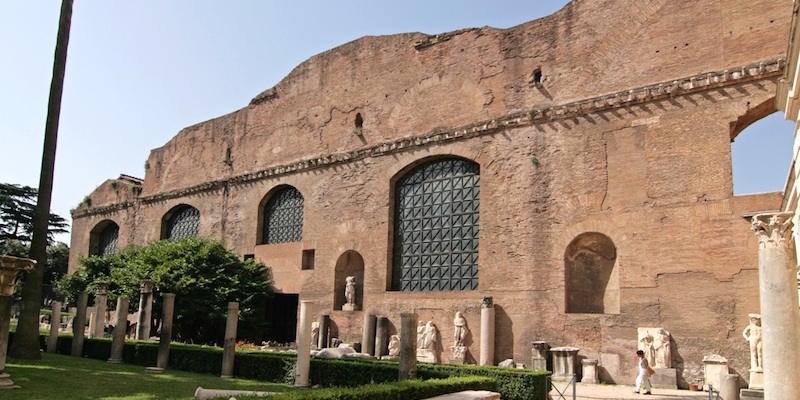 Diocletian Baths
These are the biggest thermal baths in Rome, built between 298 and 306 AD. The thermal system is like the one of the thermal baths of Traiano up Colle Oppio with a big semicircular exedra and the rectangular calidarium with three semicircular niches. It was followed by the tepidarium, a basilican room and the rectangular pool, everything was arranged on the central axis, on both sides of this axis there were rooms arranged symmetrically : gymnasiums, dressing rooms and service rooms. Most of these structures can still be seen in the church of S. Maria degli Angeli that occupies the central room, the basilica and part of the pool. The rooms between the basilica and the gymnasium are occupied by the Museum of the Thermal baths. An octagonal room, which is part of the Roman National Museum, is at the corner on the west side, at the cross-roads with today’s Via Parigi. On the sides of the big exedra there were two circular rooms, one of which, on the west side, has been transformed in the church of S. Bernardo alle Terme. Between these and the exedra, maybe used as a theatre, there were two rectangular rooms, probably libraries. On the opposite side there are two still well preserved exedrae where there used to be lectures and public readings.

Are you a local? What do you think about Diocletian Baths? Login to suggest it!