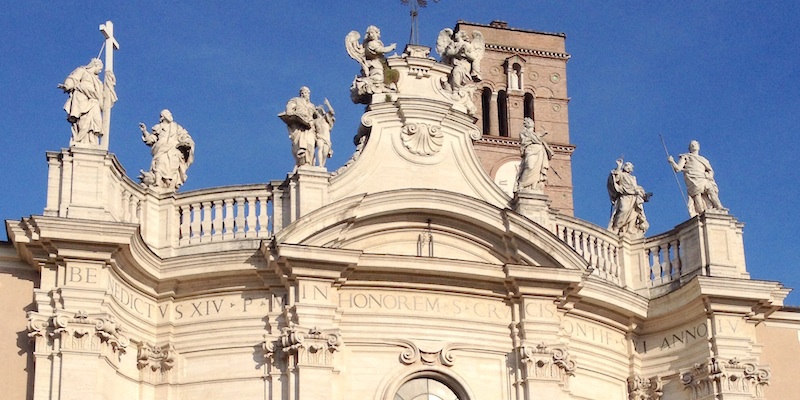 Basilica of Holy Cross in Jerusalem
The basilica of Santa Croce in Gerusalemme (Holy Cross in Jerusalem) is also called Heleniana or Sessoriana. It rises on the area previously occupied by the Sessorium, a residential complex owned by the Emperor, started in the first half of the third century AD, which included the real palace, a circus and an amphitheatre (currently called Anfiteatro Castrense) successively englobed within the Aurelian Walls. Later the palace became the residence of Helena, mother of Constantine.

Around the first half of the IV century, Constantine made a basilica out of the atrium of the palace where to keep the relics of the Holy Cross, brought to Rome by Helena after a journey to Palestine. The original basilica is a rectangular hall that presents three transversal naves.

It was restructured in 1144 by Pope Lucius the Second, who divided it into three longitudinal naves, built a portico (narthes), the brick bell-tower that still survives, and the cloister in the monastery that had risen next to the church since the tenth century.

Important interventions on the ceilings of the naves and on the wall decorations were promoted at the end of the fifteenth century by the Spanish cardinal Carlvajal, who commissioned them to a circle of artists, from whom the names of Melozzo da Forlì and Antoniazzo Romano stand out.

The basilica assumed its current appearance in the eighteenth century, when Pope Benedict the Fourteenth Lambertini (1740-1758)commissioned the building of a new facade and the restoration of the interior to the architects Domenico Gregorini and Pietro Passalacqua.

The travertine facade is one of the masterpieces of the Roman late baroque and shows an evident influence by Borromini in the dynamic alignment of concave and convex surfaces. It is divided in three sectors by a single order of pilasters and surmounted by a curvilinear tympanum with a balustrade and statues of the Evangelists, Helena and Constantine.

The brick Romanesque bell-tower with pairs of double lancet windows dated back to the time of Lucius the Second (twelfth century) stands out on the right. The central portal leads to an elliptical atrium with a small dome, granite columns and an annular corridor, which is also a work by Gregorini and Passalacqua.

The interior consists of three naves delimited by twelve antique colossal granite columns, four of which were englobed by pillars in the eighteenth century restoration. The restoration also introduced supporting pilasters, stucco decorations, and the wooden ceiling, the centre of which is decorated with a large canvas painted by Corrado Gianquinto (1744). The Cosmati floor was restored in 1933. An eighteenth century ciborium in the presbytery is supported by its columns (1148).

Under the high altar there is a basalt urn with the remains of Saints Caesareus and Anastasius. At the centre of the apse decorated with frescoes by Gianquinto (1744) and in the semidome by paintings attributed to Antoniazzo Romano, is the Tomb of Cardinal Francesco Quiñones by Jacopo Sansovino (1536) and, above, a marble and bronze tabernacle by Carlo Maderno.

A stairway on the right of the ciborium leads down to the Chapel of St. Helena dated back to the age of Constantine with the ceiling decorated by a magnificent mosaic, which is the remaking of an original dated back to the age of Valentinian the Third, attributed to Melozzoda Forlì (around 1484) or to Baldassarre Peruzzi (around 1510). The statue on the altar is a Roman original found in Ostia and transformed into St. Helena adding the cross and replacing the head.

The presbytery leads to the Cappella delle Reliquie (Chapelof Relics, 1930) where fragments of the Holy Cross and other relics are kept. The remarkable salon of the Biblioteca Sessoriana (Library) in the adjacent convent with the vault decorated with frescoes by Giovanni Paolo Pannini (1724-1727) deserves to be mentioned.

Are you a local? What do you think about Basilica of Holy Cross in Jerusalem? Login to suggest it!

ADDRESS: Piazza di Santa Croce in Gerusalemme 12, Rome
OPENING HOURS : Daily 7.00 am - 12.45 pm / 3.30 pm - 7.30 pm. During celebrations, visits to the Chapel of Relics and to the Chapel of St. Helena are not allowed.
WEBSITE: http://www.santacroceroma.it
YOU MAY ALSO BE INTERESTED IN...
Archaeological Sessory Complex - Holy Cross in Jerusalem