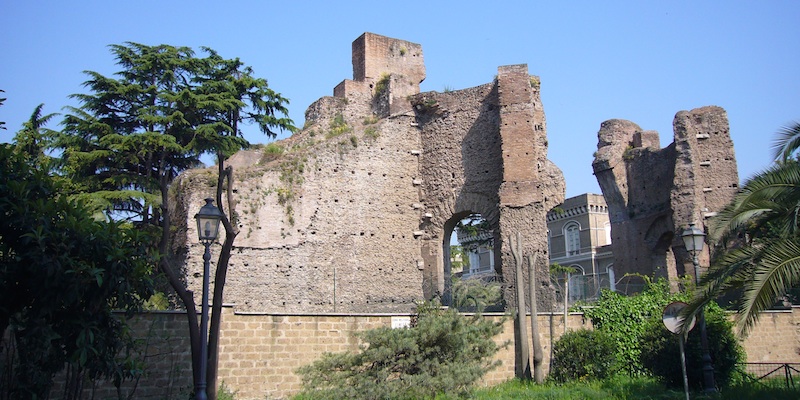 Archaeological Sessory Complex - Holy Cross in Jerusalem
The archaeological Area of Santa Croce in Gerusalemme, located just inside the old Aurelian walls of Rome, has been recently reopened to the public, making it possible to admire an extraordinary archaeological complex.

It is also possible to see the remains of the imperial residence which was built between the end of the second and beginning of the third century A.D. As well as sporting various monuments in large gardens, the extensive villa grounds also house the ruins of the Castrene amphitheatre, which was probably constructed under Emperor Heliogabalus (218-222 A.D.).

The only other example of an amphitheatre apart from the Colosseum to be found in Rome, it had a capacity of 3 500 spectators. Also located in the archaeological park is the Circo Variano, and enormous structure (577m. long) remains of which can be see near the cloisters of Santa Croce in Jerusalem.

Various parts of the imperial palace, which was enlarged upon by the Emperor Constantine and his wife, Elena, remain including parts of the walls, part of the imposing apse which formed the basilica and various domus (houses) which were probably used by the courtiers as palace residences. Several splendid black and white mosaics, laid as paving, have been found in these houses while in one particular house colourful wall frescoes have been recently excavated.

Are you a local? What do you think about Archaeological Sessory Complex - Holy Cross in Jerusalem? Login to suggest it!

ADDRESS: Piazza di Santa Croce in Gerusalemme, Rome
OPENING HOURS : Open on 1st and 3th Saturday of each month. Entrance only with guided tour.
PRICE: 5.50 euro. Free for children under 12 years old. Booking fee: Individuals: € 2,00; Groups: € 40,00 (up to 30 pax).
WEBSITE: http://www.coopculture.it/heritage.cfm?i...
YOU MAY ALSO BE INTERESTED IN...
Castrense Amphitheater