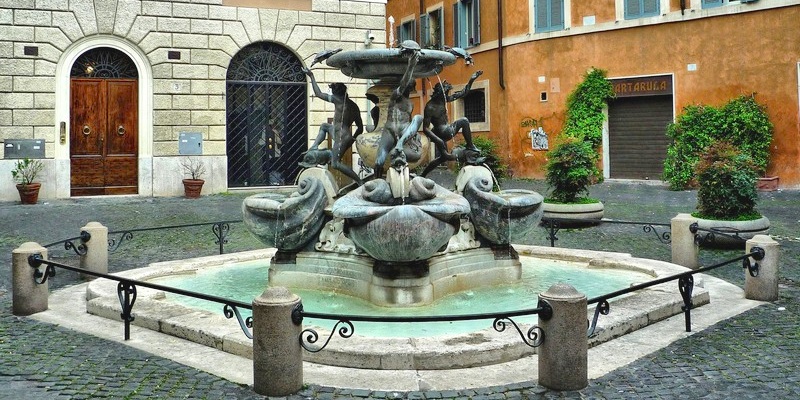 Turtle Fountain
The fontana delle Tartarughe (Tortoises) is one of Giacomo della Porta’s most elegant works, built in the years 1581-1584 and decorated with bronze ephebi and dauphins by the Florentine Taddeo Landini.

At the centre of the mistilinear pond at the ground level, a base decorated with cartouches supports four large African marble ponds that receive water from dauphins on which four ephebi rest on one foot in the act of pushing four tortoises towards the edge of the dull-grey marble basin supported by a baluster.

The basin receives water from the main spurt that flows into the basin below from the mouths of four putti. The tortoises were probably added by Gian Lorenzo Bernini in 1658 when the fountain was restored at the time of pope Alexander the Seventh Chigi (1655-1667). They were subject to repeated thefts in 1906, 1944, and recently in 1981. The current tortoises are copies of the surviving originals that are kept in the Capitoline Museums.

Are you a local? What do you think about Turtle Fountain? Login to suggest it!

200 m
Arch of the Argentari