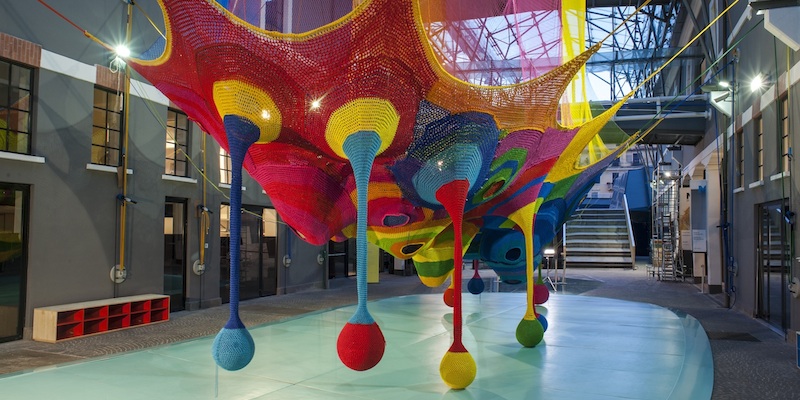 MACRO Museum of Contemporary Art Rome
The new premises of the Municipal gallery of Modern Art are the former ice factory of Peroni Beer, one of the most interesting complexes of industrial archaeology in the Capitol, whose plants were disseminated in the Quarter. The stables for horses and storehouses were located in the building occupied by the Gallery. The works to recuperate and restore the complex started in March 1996 and the first phase was completed in Summer 1999.

The building consists mainly of two three-story parallel bodies, separated by an internal walkway and connected by two glass bridge structures on the first and second floors. Two underground floors were dug out under the internal walkway to store the works.

A permanent Section (six exhibition rooms, the storehouse, laboratories, the book-media libraries, a conference room, a bookshop over 7,000 square meters), the CRDAV (Centro Ricerca e Documentazione Arti Visive, Visual Arts Research and Documentation Center) with the book, photo, video, and newspaper libraries), three large halls for temporary exhibitions, a movie theatre, offices, general services, a restaurant, and an internal parking lot are located in the two wings of the building.

The project has the scope of creating a set of small museums and exhibition halls with solutions that however are capable of expressing the characteristics of the old building and the modernity of its new target use, rather than "one" modern art gallery.

Are you a local? What do you think about MACRO Museum of Contemporary Art Rome? Login to suggest it!