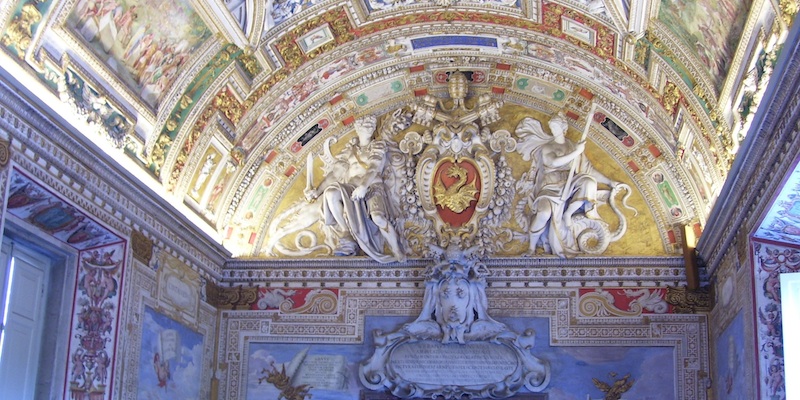 Vatican museums
1 local person suggests it The first core of the Vatican Museums and Galleries was a collection of ancient sculptures created by Jules the Second (1503-13). The idea of the Museum was conceived by Clement the Thirteenth (1758-69), who set up the Profane Museum with the assistance of Winckelmann. The Clementine Pious Museum was created by Clement the Fourteenth (1769-74) and Pious the Sixth (1775-99) and the Chiaramonti Museum was set up by Canova in 1807-1810 under Pious the Seventh. In 1822 the New Wing was opened. The Etruscan Gregorian Museum was opened in 1837 and the Gregorian Egyptian Museum in 1839, the Profane Lateran Museum (now the Gregorian Profane Museum) in 1844 and successively the Pious Christian Museum, all under Gregory the Sixteenth. In the first decades of the twentieth century the Ethnological Missionary Museum was set up and the Picture-gallery was opened to the public. In 1973 Paul the Sixth inaugurates the Historical Museum and the Collection of Modern Religious Art.

Clementine Pious Museum – It collects specimens of ancient sculptures such as the Apollo of Belvedere (130-140 AD), the Laocoon Group (first century AD), the Apollo Sauroktonos and the Venus Cnydia, the colossal Head of Jupiter. Of particular interest are the two porphyry sarcophagi of Constance and Saint Helen, respectively daughter and mother of Constantine.

Chiaramonti Museum – It hosts several Roman sculptures, such as the statue of Ganymede, a colossal head of Athena, a portrait of Tiberius, a relief with the Three Graces (first century AD). Many Pagan and Christian inscriptions are exhibited in the Galleria Lapidaria, and statues such as the Wounded Amazon, the Spearman, the enormous statue of the Nile, and the Augustus from Prima Porta are exhibited in the New Wing.

Etruscan Gregorian Museum – It contains several findings coming mainly from nineteenth century excavations performed in Southern Etruria, such as the trousseau of the Regolini-Galassi tomb. The exhibition includes sarcophagi and a rich collection of Greek, Italiot, and Etruscan vases. Of particular interest is the bilingual sepulchral stele of Todi with a double inscription in Latinand in Gallic (second century BC).

Egyptian Gregorian Museum – It was conceived by father Ungarelli, one of the first Italian Egyptologists, and collects a series of statues representing divinities or personalities of the Royal family, such as the mother and sister of Ramses the Second, sarcophagi, mummies, and elements of the funerary furnishings. Also the statue decoration of the serapeum at Villa Adriana in Tivoli has been reconstructed.

Profane Gregorian Museum – It exhibits Greek and Roman sculptures such as three fragments of the Parthenon in Athens, the Head of Athena (460 BC), the Altar of the Vicomagistri (first century AD) and two great reliefs representing the Arrival of Vespasianin Rome and the Departure of Domitian. It also includes sarcophagi decorated with mythological subjects the group of Athena and Marsia stands out from the bronze copies.

Christian Pious Museum – It collects materials coming from the excavations of the Roman catacombs, several sarcophagi (third-fifth century AD), one of which is a copy of the sarcophagus of Junius Bassus, and the statue of the Good Shepherd (third century AD).

Ethnological Missionary Museum – It documents the religious events and the cults of other continents. Of particular relevance are the fifteenth century Aztec sculptures, the Indian sculptures of Hinduist gods, the ritual masks from Oceania and Africa.

Collection of Modern Religious Art – Partly set up in the rooms of the Borgia Apartment, decorated by Pinturicchio, it exhibits works by Rosai, Boccioni, Balla, De Chirico, Guttuso, and Manzù.

Vatican Library Museum – It hosts several testimonies of sacred art: the Hall of the Aldobrandini Wedding with frescoes of the Roman Age, the Hall of Papyri with gilded glasses of the early Christian Age, the Sistine Hall with frescoes by Cesare Nebbia and other artists, the Pauline Halls, the Alexandrine Hall, and the Clementine Gallery with sketches by Bernini.


Are you a local? What do you think about Vatican museums? Login to suggest it!

ADDRESS: Viale Vaticano 100, Rome
OPENING HOURS : Vatican Museums - Sistine Chapel: Monday-Saturday: 9:00-18:00. Last admission: 16:00. Last Sunday of the month: open and free of charge from 9:00 to 14:00, last admission 12:30. On Thursday 24 December 2015, the Vatican Museums will close at 3.30 pm; last admission at 1.30 pm. On Monday 11 January the Sistine Chapel will close at 10.30 am; last admission at 10.00 am. The Sistine Chapel will reopen to the public at 12 noon.
PRICE: 16 euro. Concessions: 8 euro for children and young people aged between 6 and 18 years (18 years included); students aged not more than 26 years. Schools: 4 euro per person. The Reduced Ticket is granted every 10 students to the students, to the teacher or companion; the teacher and companion in excess pay the full fare. Free tickets are not granted. Free Entrance on the last Sunday of each month, on World Tourism Day (September 27), always for children under 6 years of age, disabled (with a certification that attests the invalidity of more than 74%) and one companion each.