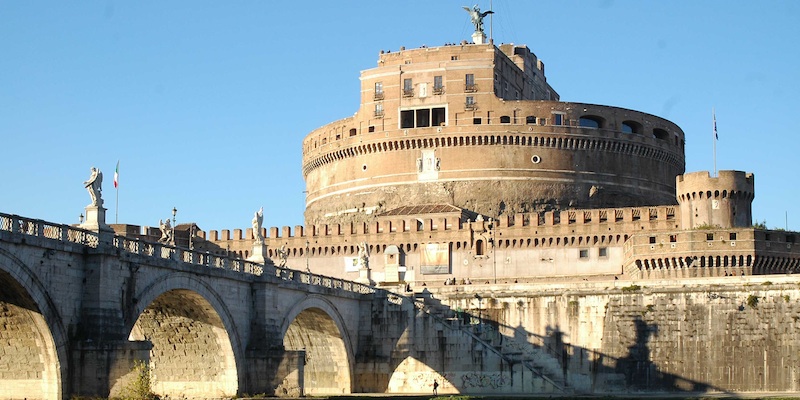 National Museum of Castel Sant'Angelo
The monument was built by emperor Hadrian (117-138 AD) together with the Aelius bridge in front of it to become a mausoleum for himself and for his successors. It was completed by Antoninus Pious in 139 AD. In 271 the monument was incorporated into the defensive works designed by Aurelian, losing its sepulchral function and assuming the function of a fortress.

In the course of centuries it became the defensive rampart of the Vatican City, the site of a garrison, a prison, but also the offices of the Vatican Treasury and Archive. In 1925 the National Museum of Caste Sant’Angelo was founded to celebrate the glories of the Army.

Today the interior of the castle can be visited with its seventeenth century rich frescoed halls (Hall of Apollo, Hall of Paolina decorated with the Stories of Alexander the Great, Hall of Perseus with episode of the myth of the Greek hero, Room of Amore and Psiche), the prisons, the collection of antique arms, the uniforms, and the relics of the preunification States, the picture-gallery (with works by Carlo Crivelli, Luca Signorelli, and Dosso Dossi), the collection of ancient marbles, ceramics, and sculptures.

The terrace, made famous by the melodies of Puccini’s Tosca (here Cavaradossi gives his yearning farewell to life), offers one of the best panoramic views of the Historical Center.


Are you a local? What do you think about National Museum of Castel Sant'Angelo? Login to suggest it!

ADDRESS: Lungotevere Castello 50, Rome
OPENING HOURS : Tuesday-Sunday: 9.00am - 7.30pm. Closed: Monday, December 25, January 1. Last entrance at 6.30pm. Last admission 1 hour before closing time. Free admission the first Sunday of the month.
PRICE: 7 euro. Concessions: 3,50 euro for people between 18 and 25 years old and state teachers. Free admission the first Sunday of the month and for under 18, tour guides, reserved school groups, teachers and students of faculties of Architecture, Conservation of the Cultural Heritage, Education Sciences, and degree courses in the Arts, disabled persons and a companion.
WEBSITE: http://castelsantangelo.beniculturali.it
YOU MAY ALSO BE INTERESTED IN...
Mausoleum of Hadrian (Castel Sant'Angelo)