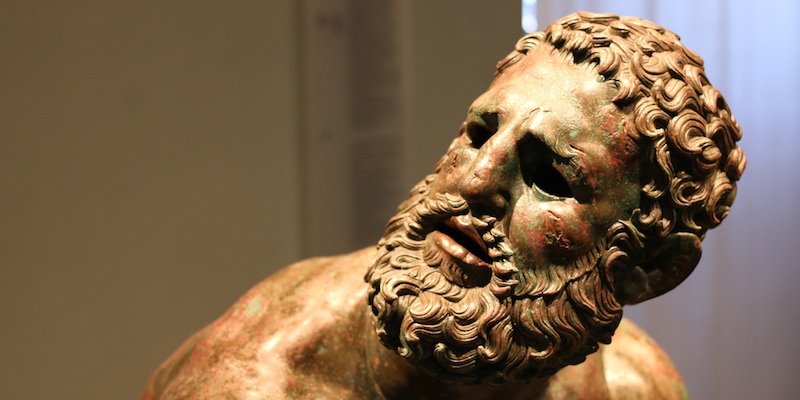 The exhibition occupies the four floors of the Palace. The Numismatic Section (collection of the former Kircherian Museum, Gnecchi collection, Victor Emanuel the Third of Savoy collection) and the Jewelry Collection (gems found in the funerary trousseaus discovered in Rome and in its surroundings) are exhibited in the basement.

The other three floors document the Ancient Art Section with works of the Roman artistic production, from the end of the Republican Age to the Late Imperial Age, together with Greek originals coming from the Horti Sallustiani.

The ground floor documents the deep transformation of the Roman Society in consequence of the conquest of Greece and the birth of the principality through portraits, mosaics, inscriptions, and sculptures.

The first floor documents the taste and the models that inspired the sculptural decorations of the imperial country-houses, from the one in Latium that belonged to Nero to the one near Tivoli that belonged to Hadrian. A few monumental sarchofagi and bronze elements coming from the ships on the Lake of Nemi are of particular interest.

The second floor exhibits paintings and mosaics found in the houses in Rome and in the country-houses in its surroundings. These include the frescos and stuccos from the Villa Romana della Farnesina at Via della Lungara and the decorations painted in the underground hall of Livia’s country-house at Prima Porta. An important example of decorations with marble tarsias is represented by the panel with the head of the Sun coming from the Mithreum of Santa Prisca.

Are you a local? What do you think about Roman National Museum - Palazzo Massimo alle Terme? Login to suggest it!