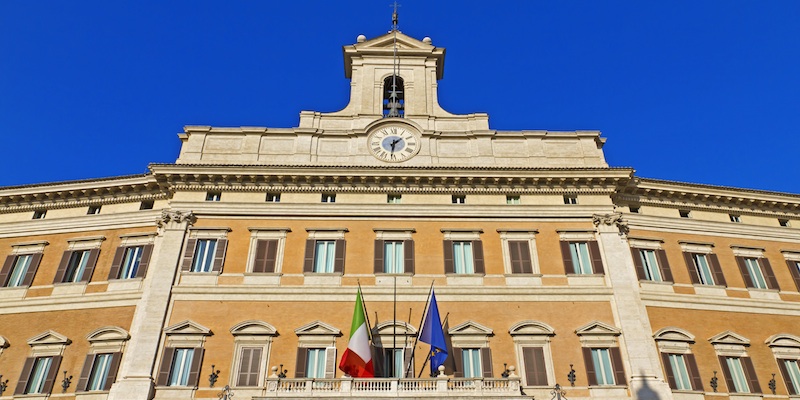 Palazzo di Montecitorio
The present seat of the Chamber of Deputies stands on an area occupied by the 15th century Palazzo Gaddi. The building was entrusted in 1653 to Gianlorenzo Bernini by Innocent X Pamphilij, who wanted to give it to the Ludovisi family. In 1694 Innocent XII Pignatelli decided to convert it into the seat of the State Law Courts and entrusted the works to Carlo Fontana.

In 1871 the palace became the seat of the Chamber of Deputies but, being insufficient for its new functions, it was enlarged according to the project by Ernesto Basile who, between 1908 and 1927, added the new body containing the present Parliament hall and realized the facade onto Piazza del Parlamento.

The main facade onto Piazza di Montecitorio still preserves Bernini's extremely convex lines (the central body and the side wings are slightly projected). Rich in scenographic motifs, it has naturalistic decorations typical of the Baroque architecture like the rustic ashlars in the corner of the wings and in the windows on the ground floor.

Fontana added the triple entrance, the gabled bell tower and the semicircular arcades in the courtyard. In tune with the liberty style popular at the time, Basile built a new section at the back of the 17th century palazzo, with an entrance on Piazza del Parlamento.

In the palazzo's interior, feature worthy of note is the famous "transatlantic" corridor next to the assembly hall (decorated by Sartorio and Calandra).

Are you a local? What do you think about Palazzo di Montecitorio? Login to suggest it!