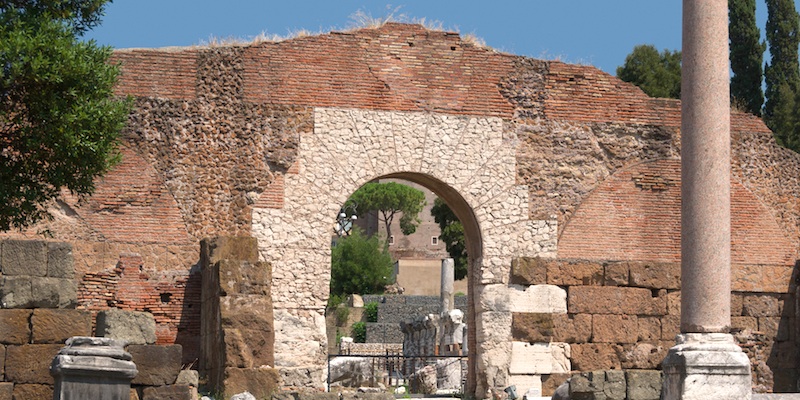 Porticus Aemilia
The Porticus Aemilia is named after the censors L. Aemilius Lepidus and L. Aemilius Paulus, who built it in 193 BC. This is a wide complex of storehouses built to contain the goods that arrived in Rome through the Tiber river and were unloaded in the nearby river port, in correspondence of the modern quarter of Testaccio.

It looked like a huge shed about 1,660 feet long and 200 feet wide, divided internally by 294 pillars into seven naves that gradually descended two by two towards the Tiber river and were covered by a barrel vault.

The building was tightly connected with the river port built at the end of the third century BC and was situated in the zone behind the Emporium, a large square for the market of goods.

This was the largest commercial building ever built by the Romans, as results also from the Forma Urbis Severiana, and the most ancient example in Rome of a building realized using the “opera incerta” technique. Ruins of its structures are still visible between via Rubattino and via B. Franklin in the Testaccio Quarter.

Are you a local? What do you think about Porticus Aemilia? Login to suggest it!

ADDRESS: Via Beniamino Franklin, Rome
OPENING HOURS : The monument is visible from the outside.