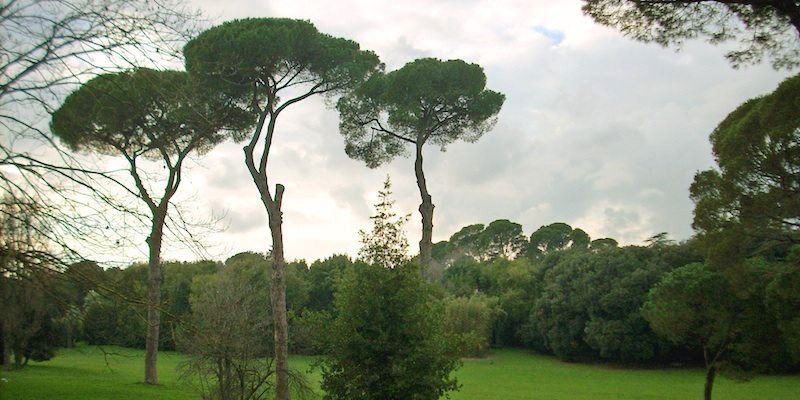 Villa Ada Savoia
Villa Ada with a surface of 450 acres (1.8 km2) is the second largest in the city after Villa Doria Pamphili. It is located in the northeastern part of the city. Its highest prominence is Monte Antenne with an altitude of 67 m (220 ft), an ancient archeological site.

The wooded expanse was owned by the Italian royal House of Savoy in the latter half of the nineteenth century; it contained the royal residence (1872–1878). In 1878 the area came under the control of Count Tellfner of Switzerland, who named it in honor of his wife Ada. The royal family regained control of the land in 1904 but did not change the name. They retained control of the area until 1946.

The public portion of the park is much larger than the private area. It contains an artificial lake and many trees, including stone pines, holm oaks, laurels and a very rare metasequoia, imported from Tibet in 1940. Entrance to the park is free. One may rent canoes, bicycles, or riding horses. There is a large swimming pool.

Since 1994, during the summer the park hosts the world-music festival and the "Roma incontra il mondo" (Rome meets the World) festival, against racism, war and the death penalty.

Are you a local? What do you think about Villa Ada Savoia? Login to suggest it!

ADDRESS: Via Salaria 265, Rome
OPENING HOURS : 7 AM to sunset
WEBSITE: http://www.sovraintendenzaroma.it/i_luog...
YOU MAY ALSO BE INTERESTED IN...
Neighborhood Coppedè